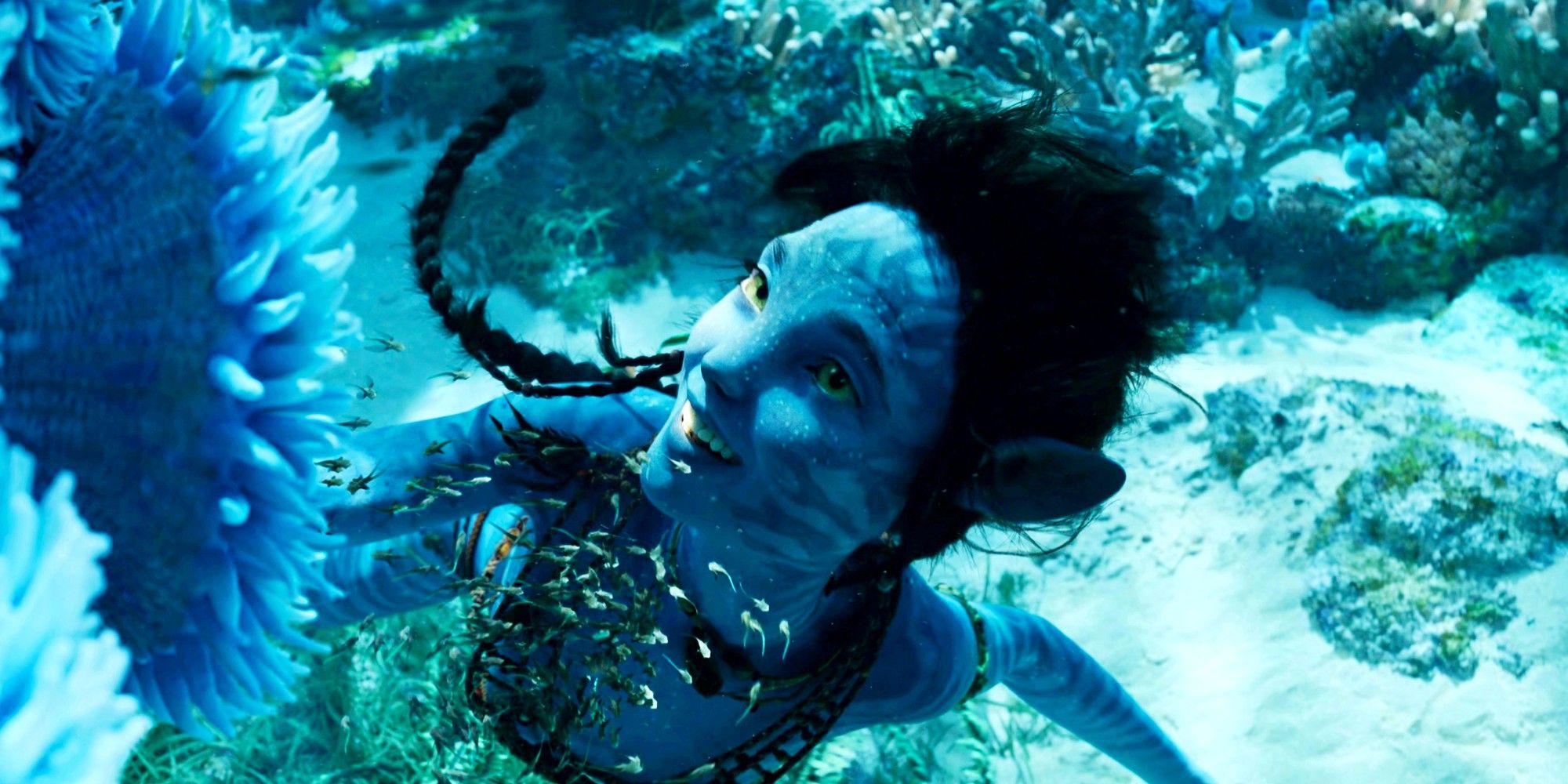 
Avatar: The Way of Water employs a number of major leaps forward in CGI water simulation technology that makes the effects even more groundbreaking.

A new video breaks down how the CGI in Avatar: The Way of Water is actually way more groundbreaking than many realize. Upon its release in 2009, James Cameron’s Avatar introduced audiences to the breathtaking alien world of Pandora and its native inhabitants, the Na’vi. The film is renowned for its spectacular visual effects, something that Cameron is pushing even further in the film’s sequel, Avatar: The Way of Water. The upcoming film follows Jake Sully (Sam Worthington) and his family as they fight once again to preserve Pandora from human invaders.

A recent trailer for Avatar: The Way of Water teases some of what’s to come in the sequel, including great leaps in CGI technology and a more sea-focused setting. Even before the trailer was released, reports detailed the elaborate water tank filming that many of the cast were undertaking for their roles, with newcomer Kate Winslet setting a new world record among actors for the longest underwater breath-hold. In addition to Worthington, Avatar: The Way of Water sees the return of a number of actors from the first film, including Zoe Saldana, Sigourney Weaver, Giovanni Ribisi, and Stephen Lang.

In a new video as part of their “VFX Artists React” series, the artists at Corridor Crew take a look at the trailer for Avatar: The Way of Water and break down just why the CGI is so groundbreaking. In addition to highlighting the incredible advancements made to CGI skin, the hosts delve deeper into one particular shot in the trailer that shows off some brand-new water simulation technology patented by the movie’s main VFX house, Weta Digital. Check out what the folks at Corridor Crew say about the new water simulation technology shown off in the trailer:

Ian Hubert: “The bit that I think is nuts is the surface tension in the bottom left, the way it goes into that woven bit. I don’t remember ever seeing surface tension on that complex and dynamic of a scale. As the water goes away it’s still trapped there in the little bits [of woven fabric].”

Sam Gorski: “On top of that, from a visual and rendering standpoint, I don’t even know how many patents they’ve been making. But I’ve seen little blurbs pop that’s like, ‘Oh, cool, Weta’s got like 4 or 5 new water simulations patents,’ for really unique cases like this shot.”

Wren Weichman: “I think there’s a two-stage water simulation happening here. Normally, when you do a water sim it’s very particle-based and they’re doing that first particle sim for the water. But then, when it actually interfaces with something I think what [the new patent’s] saying is it’s actually generating new particles at those actual surfaces and that’s kind of creating the illusion of that water tension that you’re talking about.[…] Weta is famous for literally inventing tools from scratch to make their movies.”

In addition to their work on the first Avatar film, Weta Digital is also renowned for their contribution to the Lord of the Rings trilogy, as well as a host of other films, and the new video from Corridor Crew shows that the studio is once more pushing the limit of CGI even further in Avatar: The Way of Water. While much still remains unknown about Cameron’s upcoming sequel, it’s clear that, when it comes to the depiction of CGI water, the new film will be introducing techniques and technologies that audiences have never seen before. With much of the new film taking place in an ocean setting, Weta Digital evidently committed to making water simulations that, at least from the shots in the trailer, look photo-real.

Just as the first Avatar represented a massive leap forward in CGI technology, it appears that the second will be similarly innovative with its groundbreaking visuals. While not all of the CGI in the original Avatar looks as good by today’s standards as it did in 2009, its sequel has the opportunity to potentially introduce life-like effects that will hold up for decades to come. With a release date for Avatar: The Way of Water set for December 16th, audiences will likely be treated to additional trailers showing off more of the film’s visual effects in the coming months.

More: Who Is Avatar 2’s Villain: Na’vi, Humans Or Both?

Ryan Northrup is a freelance writer for Screen Rant, MovieBozo, and Flickfeast, and a lover of all things film. Whether it’s the latest Marvel release, the hottest new Netflix series, or a smaller indie film, Ryan just loves the art of storytelling – and writing about it! He also firmly believes that Knowing with Nic Cage is a good movie.