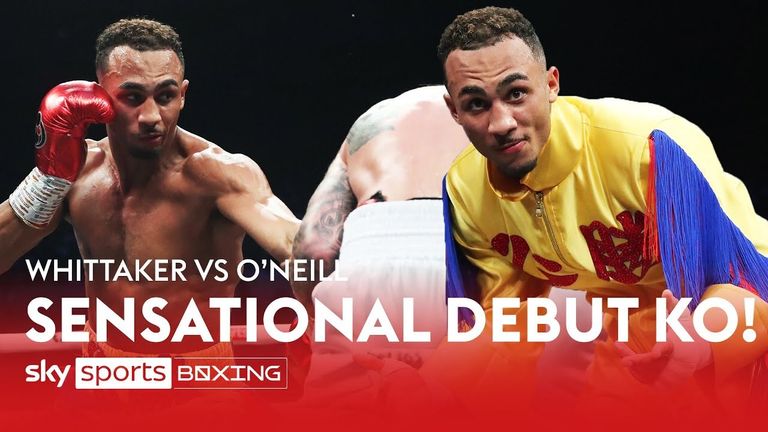 
Ben Whittaker knows how to make an entrance. On Saturday he had his first contest as a professional fighter. The bout only lasted four minutes and 21 seconds (including the one-minute break after the opening round) yet it was enough for the Olympic silver medallist to announce himself.

Against Greg O’Neill in Bournemouth, he put his showboating and his willingness to engage with both the crowd in the arena and his opponent in the ring on full display in the first three minutes.

Returning to his corner, trainer SugarHill Steward told him: “Okay, you’ve had your fun. He’s very frustrated, I can see that and he’s starting to gas out a bit now. So all you have to do is keep touching him with your jab. When you feel right put that right hand on him.”

Whittaker followed that guidance precisely. Twenty seconds later he was up off his stool, out in the centre of the ring. His right shot down and left his opponent laid out on the canvas.

“I call that the one-hitter-quitter,” he laughed.

“It’s something I’ve been working on in camp with Joby (Clayton) and then Sugar. It’s just a simple one-two but it’s just about timing then, instead of it being your typical straight one-two, I just turned it around at the end and it caught beautiful. As soon as it hit I felt it on my hand and then I thought that’s it, he’s not getting back up. That’s it, that’s all she wrote.

“With people watching and all the hype and stuff, [wondering] ‘Can he punch, can he this and that?’. I thought it was the perfect way to start and hopefully I can carry that on through my career.”

The punch itself was exactly what he and Steward had practised in the warm-up for the fight.

“The shot that we worked on in the changing room was the actual shot that knocked him out so [Steward] was buzzing,” Whittaker said.

“It was the icing on the cake really. We’ve only had six, seven weeks together and I’m doing that already. So after 12 months, 18 months, it’ll be good to see where we actually are at.”

O’Neill had tried to rattle Whittaker, stepping into him in their face-off after weighing in the day before and looking to roughhouse the Olympic silver medallist in the fight. “If he had the chance,” Whittaker said.

“Of course he was a journeyman but he had a 50-50 record and he actually came to win. It’s not like he just wanted to tuck up and just get through it.

“He tried to hit me on the break and stuff like that. So he was there to try and cause an upset. When someone comes to fight, they can walk onto shots and that’s why I liked it.”

His early showboating certainly had the crowd in Bournemouth engaged. “A lot of people really bought into the entertainment part of it and that’s what I love. Going to these amateur tournaments, I’ve been doing that for years now. There’s been no one there other than my corner team and those judges didn’t like it and those referees used to tell me not to do it,” Whittaker said.

“Where as a professional you kind of get praised if you do it now. So I was in my own element.

“I was enjoying it a bit too much but, like I said, it was my first fight since the Olympics so the timing and things like that was just a little bit off. The first round I’d grade myself probably a ‘C’ and then I brought it back with the second round so all in all I was happy.

“I showed I’m still me. I can still have fun, make them miss and then at the start of the second I showed now I’ve had my shoulder surgery I’ve got two hands and I can hurt people.”

Whittaker wants to be boxing regularly, ideally once a month from now on. “That would be perfect. By the end of the year, hopefully [have] four [bouts], pushing five, that would be great,” he said.

“The first thing I want in the first and second year is activity. The more time I spend under those lights, in front of those fans, learning to adapt to my new style, I’m going to get better.”

If the opportunity comes up to box on the undercard of the August 20 Oleksandr Usyk vs Anthony Joshua rematch, he is ready for it.

“As soon as my management team and promoter and whoever put their heads together and get me a date, that’s when I’m ready. I’m fit, no injuries so I’m just ready to go again,” Whittaker said.

His style is developing and the next fight could well be different again. 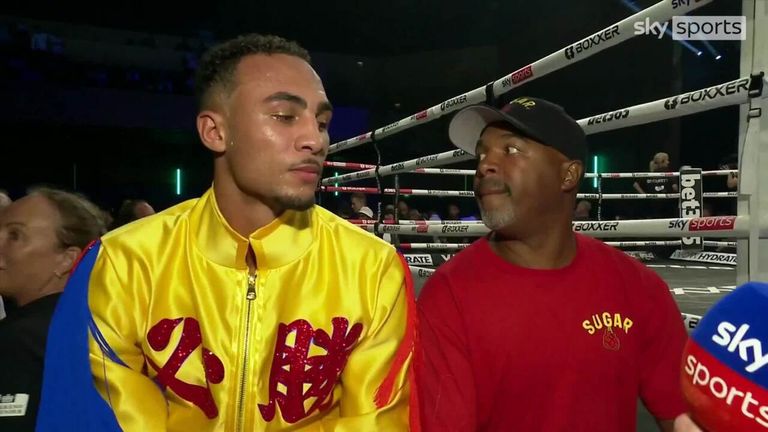 Whittaker say he enjoyed himself in the ring against O’Neill

“You have to approach every fight with an open mindset. That opponent, like you said, he came for it in the first round and I could see he was frustrated from the weigh-in. So the perfect game plan was to annoy him even more and then make him walk onto a shot,” Whittaker said.

“But with whoever’s next, you never know so. Luckily enough I’ve got Joby, I’ve got Sugar, they don’t only do one game plan, they do A, B and C, so I can mix it all up.

“So whoever’s in the opposite corner, I’ll just make them box to my strengths.”

The debut was well received, but Whittaker promises there is a lot more to come. “A lot of people really, really thought it was a great performance and, me being me, I know that’s nowhere near my best,” he said.

“If that was getting a lot of praise, just imagine when I perform and I’m happy with my performance. Then we’ll be laughing.”

The biggest fight in the history of women’s boxing – Claressa Shields vs Savannah Marshall – is live on Sky Sports on Saturday, September 10. Be part of history and buy tickets for the London showdown here.