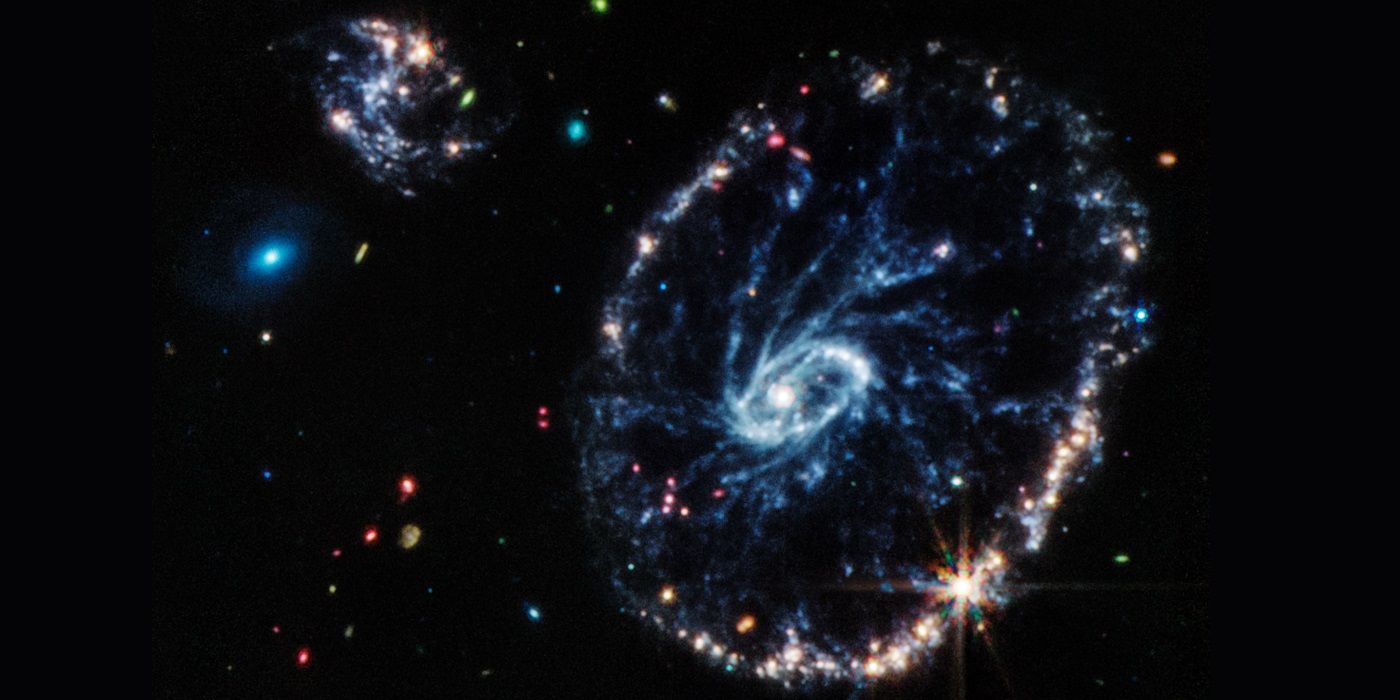 
A new image from NASA’s James Webb Space Telescope reveals the rare Cartwheel Galaxy in unprecedented detail and offers answers about its past.

NASA’s James Webb Space Telescope (JWST) has just released a remarkable image of the elusive Cartwheel Galaxy. The galaxy has been previously photographed by other telescopes, including the Hubble Space Telescope (shown above), but because it is obscured by dust and other debris, those images have been unclear. The new view provides a treasure trove of information about the galaxy’s formation and future.

The Cartwheel Galaxy is part of the Sculptor constellation, roughly 500 million light-years away, showcasing the JWST’s ability to peer into the depths of space. Collecting data about the first galaxies formed in the universe has historically been challenging because the farther an object is in space, the more the wavelength of light is stretched towards the red part of the light spectrum (a phenomenon known as redshifting). Scientists have hoped that the James Webb Space Telescope’s infrared capabilities would allow them to observe these faraway galaxies in much greater detail. The Webb telescope began publishing images on July 12, which have already provided a great deal of new information about the universe. Now the telescope has offered unprecedented insight into how the mysterious Cartwheel Galaxy has developed over billions of years.

The new image (below) suggests that the Cartwheel Galaxy was likely once a spiral galaxy not unlike the Milky Way. However, when that galaxy collided with another at high-speed, the two merged to form a rare ring galaxy. The Cartwheel Galaxy now features an epicenter surrounded by two rings: one small and brilliant, the other diffuse and colorful. It can be quite challenging to map galaxies, including the Milky Way, but these new details give scientists a strong sense of the architecture of the Cartwheel Galaxy. NASA notes that “These two rings expand outwards from the center of the collision, like ripples in a pond after a stone is tossed into it.” This data provides a snapshot of the galaxy at this moment, but it also reveals a galaxy in transition: the Cartwheel Galaxy will evolve as its rings continue to expand outward.

The new image is made possible by Webb’s unique collection of scientific instruments. The telescope’s Near-Infrared Camera (NIRCAM) is able to bypass the clouds of dust to observe wavelengths of light beyond the visible spectrum, while the Mid-Infrared Instrument (MIRI) can offer more detail about the dust itself. These findings reveal that the galaxy contains celestial phenomena of vastly different ages. The outer ring is approximately 440 million years old, replete with supernovas and star formation, while the inner ring houses massive young star clusters and is extremely hot and dusty.

The galaxy also features “spokes,” which were previously evident in the Hubble’s images, but which are much clearer now. The spokes consist of silica dust not unlike that of Earth, along with hydrocarbons and other chemical compounds. The result, as shown by the James Web Space Telescope, is a brilliant formation that resembles a jubilant cartwheel through space.

Next: NASA Authorization Bill: What It Means For The Moon, Mars, And Beyond

Rachel Rochester, PhD, is a NASA/SpaceX writer for Screen Rant. Rochester’s doctoral research focused on the rhetoric of climate chaos and interplanetary colonization, and she teaches at the university level about writing, rhetoric, and climate.

Rochester lives in Oregon where she spends as much time as possible hiking with her rescue dogs.