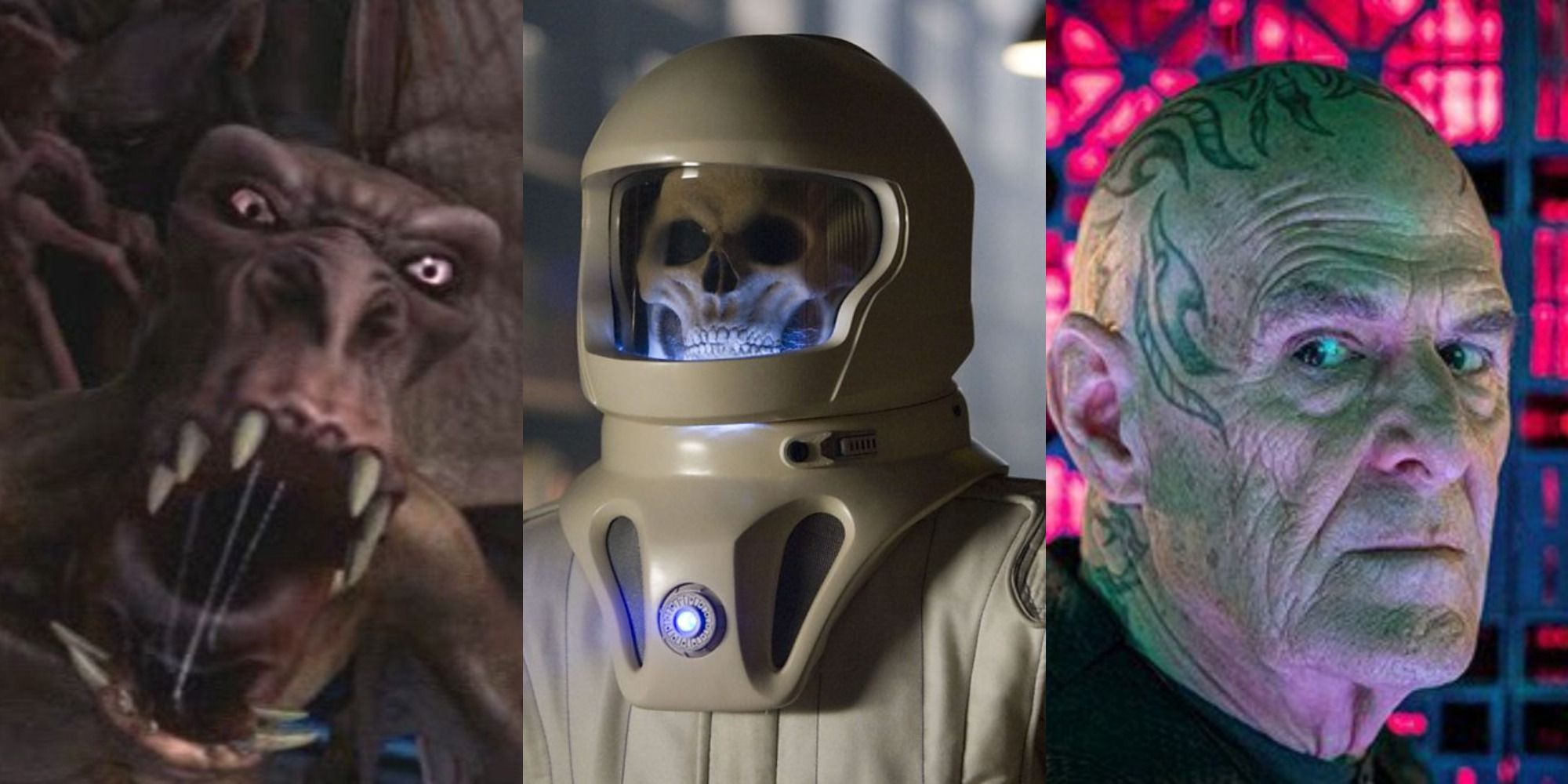 
Doctor Who features many iconic recurring villains such as The Daleks, Cybermen and Weeping Angels who are highly recognizable. Villains and monsters like these have gained so much popularity within the fandom which is why they are brought back time and time again to face off against The Doctor.

Since the show returned in 2005 though, many new one-time monsters have also been introduced. Despite only appearing once, some of these monsters have become highly popular, and fans are still hoping they may return for a second outing.

Despite their very grand entrance at the end of season 12, the Cybermasters have yet to reappear on the show. When The Doctor returned to Gallifrey and faced off against The Master, she also came face to face with his latest creation who are mix between the Cybermen and the Time Lords.

As the Master demonstrates, the Cybermasters have the ability to regenerate which makes them a truly terrifying adversary. At the end of their first appearance, they are seemingly destroyed; but, after the heavy hints that the Master will be back it wouldn’t be surprising to see them again. Although the design is quite over the top, the idea of regenerating Cybermen is one that deserves to be explored again.

The latest season of the show introduces two new villains, brother and sister Swarm and Azure. In the first half of the season, the pair are a terrifying threat that pushes the Thirteenth Doctor more than ever before. Although they are sidelined slightly in the second half of the season, they are two of the best characters in Doctor Who: Flux and certainly some of the best new villains from the Chibnall era of the show.

Swarm and Azure’s long history with The Doctor means that there is still a lot left to explore with these two. There are also still some unanswered questions about the villains such as the extent of their history with the Fugitive Doctor and why/how Swarm changes his appearance.

In the first season of the show, Rose asks the Doctor to travel back in time so she can visit her deceased father. Rose makes the mistake of saving her father’s life though and, as a result creates a wound in time which leads to the arrival of the monstrous Reapers. These huge winged creatures feed on everything in their wake, even managing to consume the Ninth Doctor.

The episode is written by one of the best Doctor Who writers and provides an emotional and heartfelt insight into Rose’s character. As there have been many similar instances of time wounds and paradoxes since this, it is surprising that the Reapers have yet to reappear in the show.

The season 12 episode, “Can You Hear Me?” introduces Zellin, a humanoid entity who feeds on nightmares. This episode develops Thirteen’s companions further as we see Graham’s fears regarding his cancer and we learn about Yaz’s previous mental health struggles.

Zellin’s detaching fingers and the menacing performance make him a particularly memorable one-time villain. After so much going on in the episode, viewers don’t learn all that much about him but do discover he is from the same time as Classic villains The Eternals. As Zellin is so menacing in this episode, it would be great to see him again.

In the first Christmas special of the revived era, The Sycorax attempt to invade Earth while the newly regenerated Doctor is out of action. The story sees Rose and her family forced to fight alone as they come to terms with a new Doctor.

After a very British helping hand from some tea, the Doctor returns and partakes in an epic sword fight with the Sycorax leader and loses his hand as a result. This missing hand goes on to play a large role later on in season 4 as it helps to prevent the Doctor’s regeneration and creates the Meta-crisis Doctor. Unlike many of the other villains on this list, The Sycorax have made several small cameos since this first appearance but have never had the chance to be a key villain of an episode again which is surprising as they are the first monsters the popular Tenth Doctor faces.

The Boneless are a unique monster introduced in season 8 and have the ability to make three dimensional things two dimensional, including people. As shown with the Weeping Angels and the Silence, often the key to a successful Doctor Who is a unique premise which is certainly the case for The Boneless.

These creatures were even able to shrink the TARDIS which certainly suggests they’re a powerful threat. As the Doctor is mostly trapped inside the TARDIS, it would be interesting for another incarnation to properly face off against The Boneless. Due to their unique nature, there is still a lot that could still be done with this monster.

Despite only appearing once, The Vashta Nerada are still considered one of the best Doctor Who monsters. The idea of carnivorous living shadows is horrifying and the library setting of their story is atmospheric and creepy.

As the setting is so unique here, there is still a lot of scope for this monster to return in a completely different location. It is remarked several times that the Vashta Nerada began in forests which would provide the perfect location for a sophomore outing. The original story has so much going on including the ghosting, Donna’s parallel world and the introduction of River Song parallel world which means there is still a lot left that could be explored, without taking too much mystery away from the creatures.

The Krillitane, like some of the other monsters on this list, have been explored further in expanded media but have only appeared once in the television show. In the second season, The Doctor is reunited with one of his companions from the classic series, Sarah Jane when they are both investigating strange goings on at a school.

Anthony Head puts in a great performance as the main villain of the episode and the leader of the Krillitane. In the episode, the Krillitane take on a bat-like appearance but the Doctor remarks how the race steal physical attributes from other races; so, they could look completely different if they were to appear again. Due to this unique aspect of the creature and their potential versatility, they would be a great monster to make a come back.

The Racnoss appear in the debut episodes of one of the best Doctor Who companions, Donna Noble. As this is a Christmas special, the performance of the Racnoss Empress is intentionally campy and over the top but this isn’t something that would to be continued if the creature made a return.

The giant red spider design itself is quite effective and means they could be used a genuine threat in another story. Also, considering their long history with the Earth and Doctor Who’s love of spider stories it wouldn’t be surprising to see some iteration of this creature in the future. In fact, the Skithra from season 12 actually closely resemble the Racnoss and many fans were disappointed when no connection was made between the two due to the similarity between the designs.

Doctor Who has had several Witch-themed stories in its history but the first of the modern era is season three’s “Shakespeare Code.” For the majority of the episode, these creatures appear as traditional hagged Witches but viewers do get to see their true alien appearance towards the end.

If these villains were to return, they could take on the traditional Witch appearance again or their true form. Also, fans have seen that the crystal ball with the Carrionites trapped inside is still kept within the TARDIS which could certainly tie into a future appearance for the villains. It also seems like a strange missed opportunity that, when Chibnall revisited Witches no mention or connection was made between these and the Carrionites.

NEXT: 10 Doctor Who Storylines That Need To Be Resolved Before 13 Regenerates

Jak Burton is an English Literature and Creative Writing Graduate. He has a passion for Television, Movies and Books. If he could transport himself into any fictional universe it would be The Wizarding World.

15 Most Jealous Characters In K-Dramas