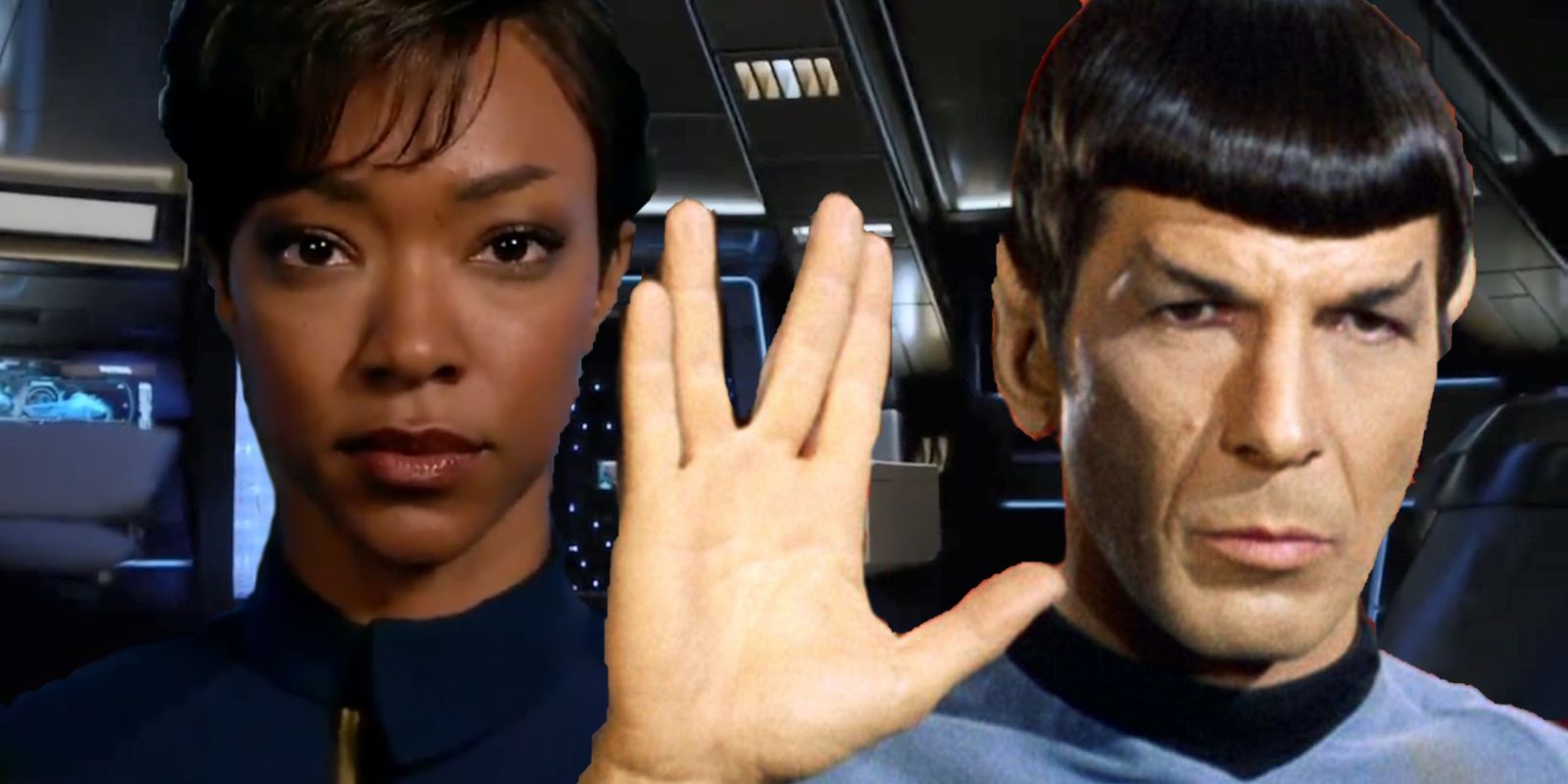 Star Trek: Discovery has launched yet another band of adventurers into far-reaches of space to seek out new life and new civilizations while bringing back plenty of classic characters. Set roughly 10 years before Kirk and his crew began their five-year mission, the show is both a reinvention of the long-running franchise and an exploration of an important event in the Star Trek’s history, the Federation-Klingon War. While season 1 of Star Trek: Discovery concentrated on setting up the series as its own entity, the show’s four instalments have integrated numerous familiar faces in recurring or guest appearances.

In Star Trek: Discovery‘s very first episode, Captain Georgiou (Michelle Yeoh), Lieutenant Commander Michael Burnham (Sonequa Martin-Green), and the U.S.S. Shenzhou‘s crew reconnect with the Federation’s archetypal adversary, the Klingon Empire. The redesigned race is just the first of many memorable characters and species to appear, as Star Trek: Discovery‘s storylines end up integrating more iconic figures as Michael and Discovery‘s crew battle menacing figures in the galaxy. While Star Trek: Discovery’s creative staff doesn’t necessarily rely on the old show and films as a crutch, the inclusion of several classic characters has elevated the continuity and memorability of the series.

Arguably the most highly anticipated, significant, and iconic returning Star Trek character appearance in Discovery has been Spock. As Michael’s foster brother and Sarek’s son, it was only a matter of time before Spock entered Discovery to work with his sister. Spock finally appears in Star Strek: Discovery season 2, where he actually plays an extremely prominent recurring role. While Ethan Peck primarily portrays the character in Star Trek: Discovery, the show also features two cameos of Leonard Nimoy’s Spock in archival footage from Star Trek: The Original Series and Star Trek: The Next Generation.

Spock’s role in Star Trek: Discovery season 2 sees him as a Lieutenant serving under Captain Christopher Pike on the Enterprise. While the character’s role is under more tragic circumstances, he comes in at the perfect time to help Michael and the Discovery crew understand the “Red Angel.” Spock had recurring visions of the “Red Angel” as a child, and they come back in a traumatizing manner in Star Trek: Discovery season 2. On leave from the Enterprise for psychiatric care, Spock reconnects with his sister, who helps him recover while working together to realize Michael’s own connection to the Red Angel. While Ethan Peck’s Spock future on Star Trek: Discovery is so far unknown, he is expected to appear in the spinoff series Star Trek: Strange New Worlds.

While Starfleet operated hundreds of ships during this era, none are as beloved as the Enterprise, which is why the ship’s appearance as helmed by Captain Christopher Pike was so exciting in Star Trek: Discovery. Initially played by Jeffrey Hunter, Pike held down the chair in the TOS pilot “The Cage” and later “returned” for “The Menagerie.” In the 2009 reboot, Bruce Greenwood took on the role, acting as Kirk’s mentor of sorts. As the franchise moves further into the past, young Captain Pike is portrayed by Anson Mount in Star Trek: Discovery season 2, returning alongside his lieutenant, Spock.

Related: Where Captain Kirk Is During Pike’s New Star Trek Series (& How He Could Appear)

Considering he’s now the charismatic leader of the Enterprise, it’s no surprise that Pike’s Star Trek: Discovery role made him a main character instead of just a cameo. While Pike has only appeared in Star Trek: Discovery season 2 so far, the classic character’s role was extremely important to the series, as he temporarily assumed command of the Discovery while the Enterprise was disabled. Pike teams up with Michael and Discovery‘s crew to investigate mysterious temporal anomalies in space referred to as “red signals,” which caused Spock’s temporary leave and disappearance. After intuiting his future injury and disfigurement as well as making mental contact with Vina, Pike departs to reassume control of the Enterprise in Star Trek: Discovery‘s season 2 finale.

Star Trek: Discovery‘s first notable throwback was Spock and Michael’s father, Sarek. Initially played by actor Mark Lenard on The Original Series, Sarek long served the Federation as an Ambassador to Earth and on the Federation Council. He also appeared in several films and on other shows like The Next Generation. On Discovery, the venerable Vulcan is portrayed by James Frain (Gotham). As Lt. Cmdr. Burnham’s adoptive father (he raised her after a Klingon raid on Vulcan killed her parents) Sarek is a prominently recurring character in Star Trek: Discovery seasons 1 and 2. His first two appearances were only as flashbacks to Burnham’s childhood and via Starfleet’s hologram-based communication device, but his role grew more substantial as the series progressed. The Vulcan ambassador survived an assassination attempt, recruited help for war against the Klingon, diligently searched for Spock during his disappearance, and finally bid Michael a loving farewell before she escaped to the future in his time on Star Trek: Discovery.

Although his encounters with the Enterprise‘s Captain Kirk and crew were few and far between, Harry Mudd left an indelible impression on fans of Star Trek. Two classic episodes, “I, Mudd” and “Mudd’s Women,” as well as a stopover on Star Trek: The Animated Series, established Roger C. Carmel’s character as an irrepressible scoundrel always looking for the next scam.

On Star Trek: Discovery, Rainn Wilson (who played Dwight Schrute on The Office) takes over as the somewhat comedic foil. This time around, however, Wilson’s Harry Mudd is far more dastardly than remembered. Harry has a fairly small role in Star Trek: Discovery, as he only appears in a recurring season 1 role. The classic Star Trek character first returned in Discovery season 1 in a Klingon jail, which is unsurprising considering his con-artist reputation. Harry Mudd’s Star Trek: Discovery return was important as a perspective outside of the Starfleet, reminding the crew that their actions and battle affect the citizens at home, too. The classic Star Trek character’s reappearance also brought back his wife, Stella Mudd, who had a small arc in the original series as an android replica of his real wife. Their arc on Star Trek: Discovery reiterated their complex relationship in the original series, as Stella is brought aboard the Discovery to save it from Harry’s vengeance.

As Sarek’s second wife and the mother of Spock, Amanda was originally played by Jane Wyatt on Star Trek: TOS and later by Winona Ryder in the 2009 Star Trek movie. Amanda Grayson made her triumphant appearance on Star Trek: Discovery in a season 1 cameo and season 2 recurring role as portrayed by Mia Kirshner. As Michael’s only human “family” member that showed her emotional love and support, Amanda’s return made sense, especially during Michael’s arc of discovering her past. Her storyline in Star Trek: Discovery involved imploring Amanda to retain her human side, researching the red bursts, helping discover the meaning behind Spock’s connection to the anomalies.

Remembered as a significant character in Captain Pike’s life, Vina makes a cameo in the Star Trek: Discovery season 2 episode “If Memory Serves.” Vina, portrayed in Star Trek: TOS by Susan Oliver, was known as the sole survivor of an Earth science expedition that crash-landed on Talos IV, who was nursed back to health by the Talosians. The Talosians, interested in humans, decided to make Vina their “Eve,” later making Captain Pike their “Adam” after luring the Enterprise. Pike and the crew decided to leave Talos, but Vina reported she couldn’t go with them as her youthful appearance on the planet was an illusion, meaning if she left, she would regain the scarred and deformed body the crash left her with. Three years after Vina and Pike separated, they reunited in Star Trek: Discovery season 2 after Vina (Melissa George) assisted Spock and Michael.

Next: Discovery Confirms What Happened To Q In Star Trek’s 32nd Century

Andy L. Kubai is a freelance writer who lives in Austin, Texas with his sweet and patient fiancee. His articles have been featured on a variety of websites, including Screen Rant, Looper, Grunge, and Bitter Empire among others.

Andy was born into Star Wars fandom and was often found zipping across the house with his trusty TIE Interceptor (the cool one with the wings that fell off) in his corny ‘80s haircut. He also loves anything Star Trek, MST3K, most sci-fi and horror related stuff, comic books, postmodern literature, and any offbeat narratives from grandiose to grade Z. Check out his website, his writer Facebook page, and follow him on his Twitter account for updates, fresh SR articles, and various projects, including the novel(s) that got away.