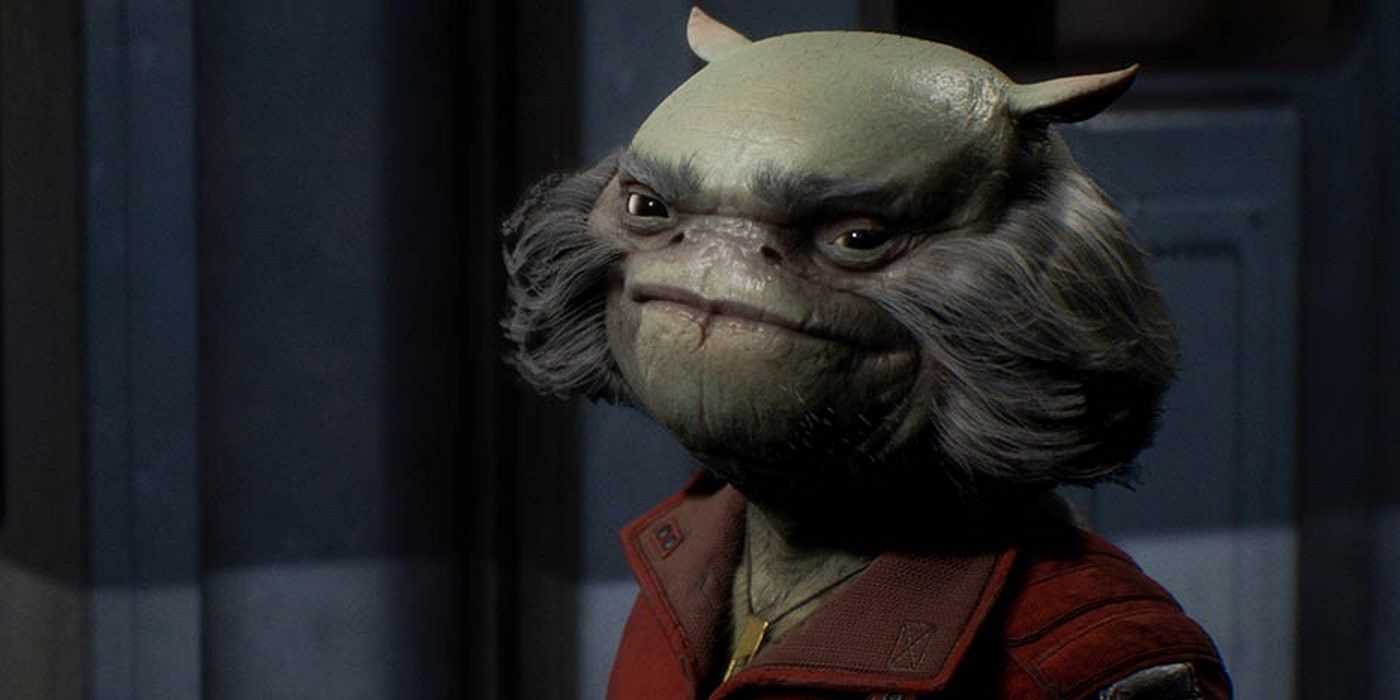 
A Star Wars Jedi: Fallen Order cutscene featuring Greez caught in an awkward conversation between two Jedi has been making the rounds again.

EA’s Star Wars RPG Star Wars Jedi: Fallen Order released in 2019, but a tragicomedy cutscene featuring Greez Dritus (and a laughable amount of salt) has recently resurfaced. The game, developed by Respawn Entertainment, will be getting a sequel fairly soon. Jedi: Survivor, slated to drop in 2023, may arrive as early as March (according to the PlayStation Network’s database).

As for why this snicker-inducing cutscene is making the rounds, there have been connections drawn between the events and missions of Cal Kestis’ crew and of the latest Star Wars show, Kenobi. Both the game and the show are thematically centered around the Inquisitors and their relationship to the Jedi, and both Cal Kestis and Obi-wan infiltrate the stronghold of the Inquisitors. With stories that are separated by only five years in canon, it’s not surprising that fans are revisiting Jedi: Fallen Order to analyze and compare the two.

Reintroduced into the zeitgeist with a tweet, the cutscene shows the crew of the Stinger Mantis sitting down together at a small, rectangular table for a somber meal. Cal Kestis comes in from a mission and sits at the end, Greez Dritus and Cere Junda are already sitting side-by-side, and BD-1 is hanging out on the corner of the tabletop. After a few seconds of uneasy silence, Cere broaches a sensitive topic – her capture by the Inquisitors some years back and subsequent betrayal of her Padawan, Trilla Sudari, who then was also captured and twisted until she became Second Sister, a deadly Star Wars Inquisitor. Cal looks annoyed, or resigned, as Cere pushes for the need to recover Cordova’s Holocron, and Greez is awkwardly looking back and forth between them as he salts his food. When Cal leaves the table, BD-1 suddenly scans Greez’ food, and Greez lambasts the little droid.

The juxtaposition of Cere’s tragic past and Greez’s amusing between-a-rock-and-a-hard-place dilemma is what makes this cutscene so funny. At first players will focus on Cere and the very depressing topic at hand, but replays of the scene might have them noticing that Greez hasn’t stopped salting his lunch since the cutscene began. It was already an eyebrow-raising amount before the awkward conversation started, but then he gets distracted glancing between his two crewmates and seems to entirely forget that he’s still salting his food. The cherry on top is what happens after Cere’s Fallen Order backstory, and Cal leaves the scene.  BD-1, reasonably concerned for Greez’ health at this point, scans his food to assess the amount of salt he’s added to it. Greez, likely realizing his mistake and becoming embarrassed, sharply tells the droid off. “Hey, get your lasers off my lunch!” he snaps, as if his meal is at all edible anymore.

A great story can tuck humor into the dreariest of places, and this holds true for Jedi: Fallen Order. The scenes that are memorable gems aren’t always the flashy ones, and the best part of replaying a favorite game is discovering them. With any luck, fans will see the crew of the Stinger Mantis once again in Jedi: Survivor, and they’ll find out whether or not Greez is still as salty as ever – and how often BD-1 scans him to check how his salt intake is affecting his health.

Jessica Barrott (AKA Rae) is a brand-new Game Features writer. Although not a hardcore gamer, she is an MMOer, game-world explorer, and raider who leaves no enemy alive, even if they are far out of her way.