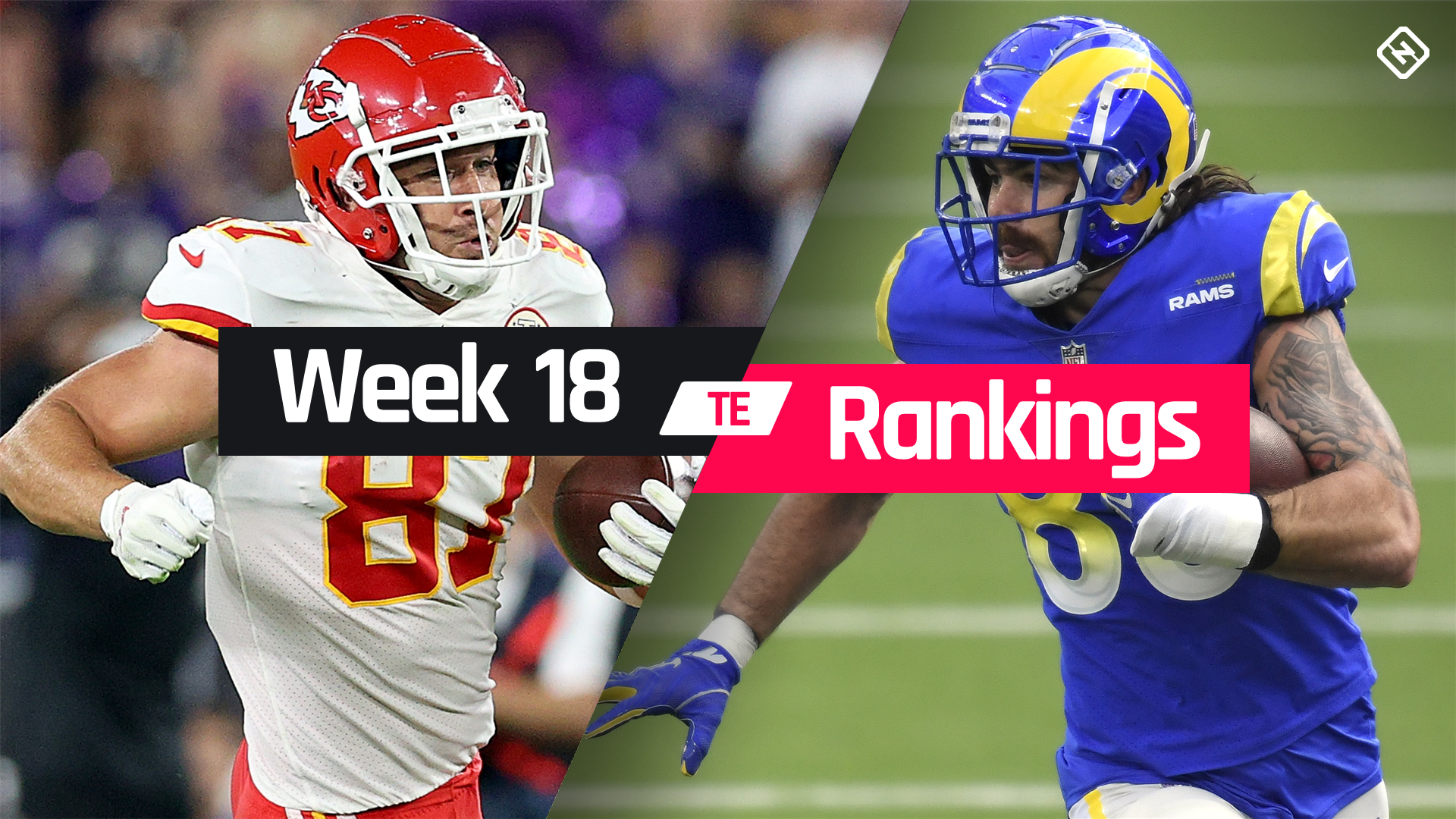 There is a small percentage of leagues that are still competing this week, so as always, these Week 18 fantasy TE rankings are here to help who decide who to start at tight end in PPR and standard leagues. For those of you who are done with traditional fantasy league for the season, these rankings can help you identify under-the-radar value in DFS. As always, some teams have nothing to play for in the final week of the regular season because they are already looking forward to their offseason plans or are locked into a playoff seed. That said, we could see some changes in these rankings later in the week, so stay tuned.

Stud TEs Travis Kelce (@ Broncos), Mark Andrews (vs. Steelers), and Rob Gronkowski (vs. Panthers) are set to face some of the fiercest teams against TEs, but we know their sky-high upside makes them impossible to bench.

What really matters are the players on the start-or-sit bubble, and we think you can call on Foster Moreau (vs. Chargers) if Darren Waller (knee) remains out, C.J. Uzomah (@ Browns), Jared Cook (@ Raiders), and James O’Shaugnessy (vs. Colts). Moreau and Cook are getting two of the top-three most favorable tight end matchups, and we think Moreau in particular, has real TE1 upside. Cook is hit-or-miss, but the matchup is strong, so this Chargers-Raiders showdown should be a fun one for the position.

Uzomah is boom-or-bust and he hasn’t delivered in a while, but the Browns are a slightly favorable matchup for TEs. Since they’re strong against wideouts and Joe Burrow is playing like an elite QB, this could finally be another big week for Uzomah. O’Shaugnessy is riskier if Dan Arnold (vs. Colts) is fully healthy, but at the end of the day, both could be considered in PPR leagues in a top-three matchup for TEs.

On the flip side, we can lower expectations for Hunter Henry (@ Dolphins), Mike Gesicki (vs. Patriots), Tyler Higbee (vs. 49ers), Cole Kmet (@ Vikings), and Tyler Conklin (vs. Bears). These guys are all set to be in worrisome matchups for tight ends, and none of them really have safe floors in either format. At one point, it looked like Gesicki would join the elite class of TEs, especially in PPR leagues, but his lack of production in the second half of the season makes him benchable. Of course, he still might be a better option than some of the streamer-level guys like Uzomah or Cook, but his floor is just as low.

We should also note Mo Alie-Cox (@ Jaguars), Austin Hooper (vs. Bengals), and David Njoku (vs. Bengals) are in favorable matchups, but their floors are even lower than the guys in tough matchups. At tight end, matchups carry a lot of weight, but at a certain point in the rankings, the overall outlook of the player and past production matters when comparing start-or-sit options, so we’re not huge believers in these three guys.

In Week 18, we’ll have to deal with the uncertainty of which teams are players are actually going to “try” 100 percent in their games, and as usual, the reserve/COVID list could come calling for your top TE at any moment. Be ready for it all, and again, check back for the latest updates.

Note: We’ll be updating these TE rankings throughout the week, so check back for the latest player movement.

Rankings based on standard, non-PPR scoring

Rankings based on full-point PPR scoring