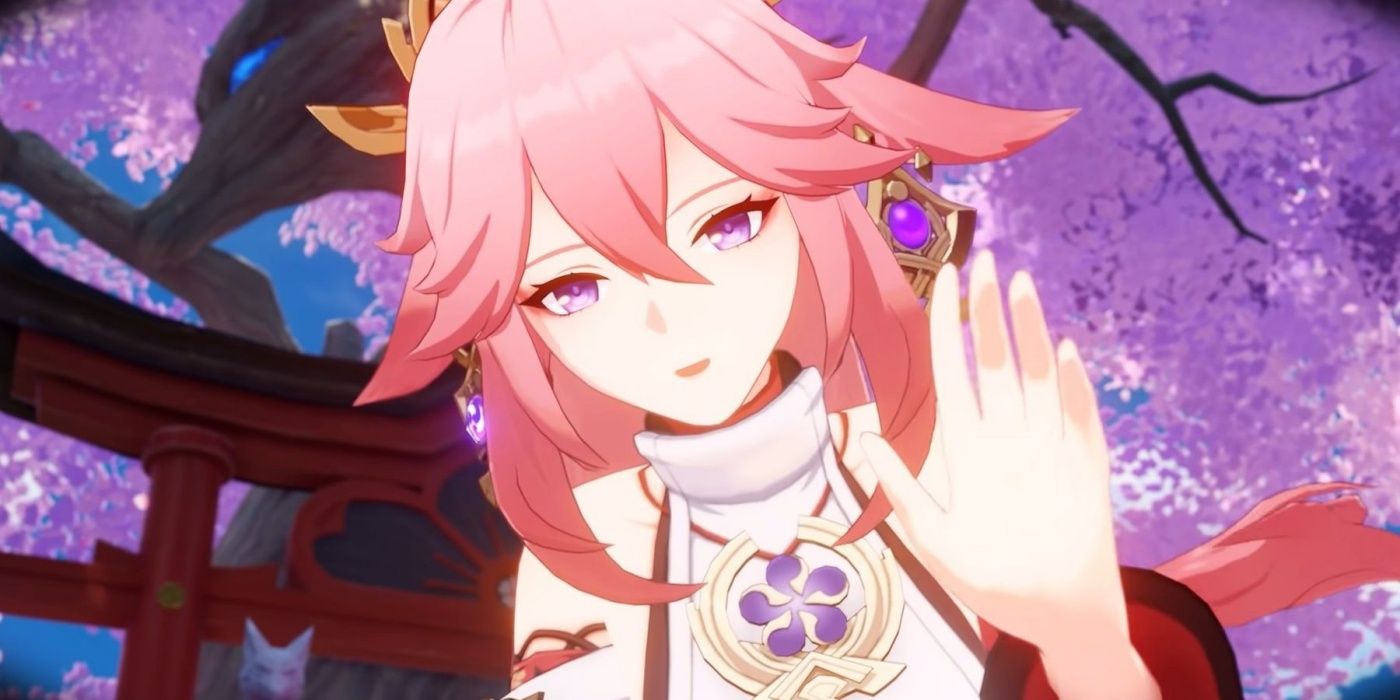 
In Genshin Impact, players can gather materials for ascension and talent to prepare for the upcoming release of the new Electro character Yae Miko.

Players will be able to use Yae Miko as a playable character in Genshin Impact, likely beginning February 16, 2022. Yae Miko is the overseer of the Grand Narukami Shrine and the owner of the Yae Publishing House. Yae Miko is a kitsune from the Hakushin Clan and has a fox form, which may play into her in-game abilities. Yae Miko is a 5-star Electro character wielding a weapon that resembles a Kaura Suzu, a purple relic adorned with bells. In the meantime, players can gather the required resources that will be needed for her ascension and talent.

Players will need to defeat the Bathysmal Vishap Herd in Genshin Impact to find Dragonheir’s False Fin, a material used to level-up characters. Players will be able to find this enemy in Dainichi Mikoshi, the artificial sun of the watery region of Enkanomiya. To defeat the Bathysmal Vishap Herd in battle, players should approach the fight with a party comprised of Pyro and Geo characters like Hu Tao and Zhongli or Shield characters ad well as a healer and an energy-generating character.

Once the boss battle begins, players will need to dodge their Cryo and Electro attacks, which will cause the herd to jump toward the opposite end of the battle arena. To level Yae Miko to level 90, players will need to farm 46 of these fins, and each victory against a Bathysmal Vishap Herd will reward players with two or three Dragonheir’s False Fins at the cost of 40 resins.

Another material used to ascend Yae Miko in Genshin Impact is Sea Ganoderma, a plant that can grow on beaches and tidal flats around the shoreline. These plants are a local specialty of Inazuma, and players will need to gather 168 of them for a level 90 Yae Miko. Of note, only 68 Sea Ganoderma spawn in the wild, but they do reset every 48 hours. Additionally, players can grow up to 12 of their own Sea Ganoderma in the Serenitea Pot, which resets every 70 hours.

Handguards can be used for Yae Miko’s ascension. This item is dropped by Samurai warriors Nobushi and Kairagi from Inazuma in Genshin Impact, and they can be found in most areas of the region. Yashiori Island, in particular, is often full of these enemies to farm. Kairagi can be found by themselves or in pairs, while Nobushis are always in groups. Players should note that when Kairagi appear in pairs, the last remaining warrior will receive a buff. Because the Samurai warriors are heavy, they are easy to freeze. For Yae Miko to reach level 90, players will need 18 Old Handguards, 30 Kageuchi Handguards, and 36 Famed Handguards. Additionally, because Yae Mikeo is an Electro character, the player will likely need Electro Jewels.

In addition to the ascension materials for Genshin Impact’s Yae Miko of Dragonheir’s False Fins, Sea Ganoderma, and Handguards, her talent materials are Handguards and Light Series. To maximize her Electro abilities, players will need to gather 18 Old Handguards, 66 Kageuchi Handguards, and 93 Famed Handguards. Players can get talent-level books on Wednesday, Saturday, and Sunday in the Violet Court area. For Yae Miko’s talents, players will need 9 Teachings of Light, 63 Guide to Light, and 114 Philosophies of Light.