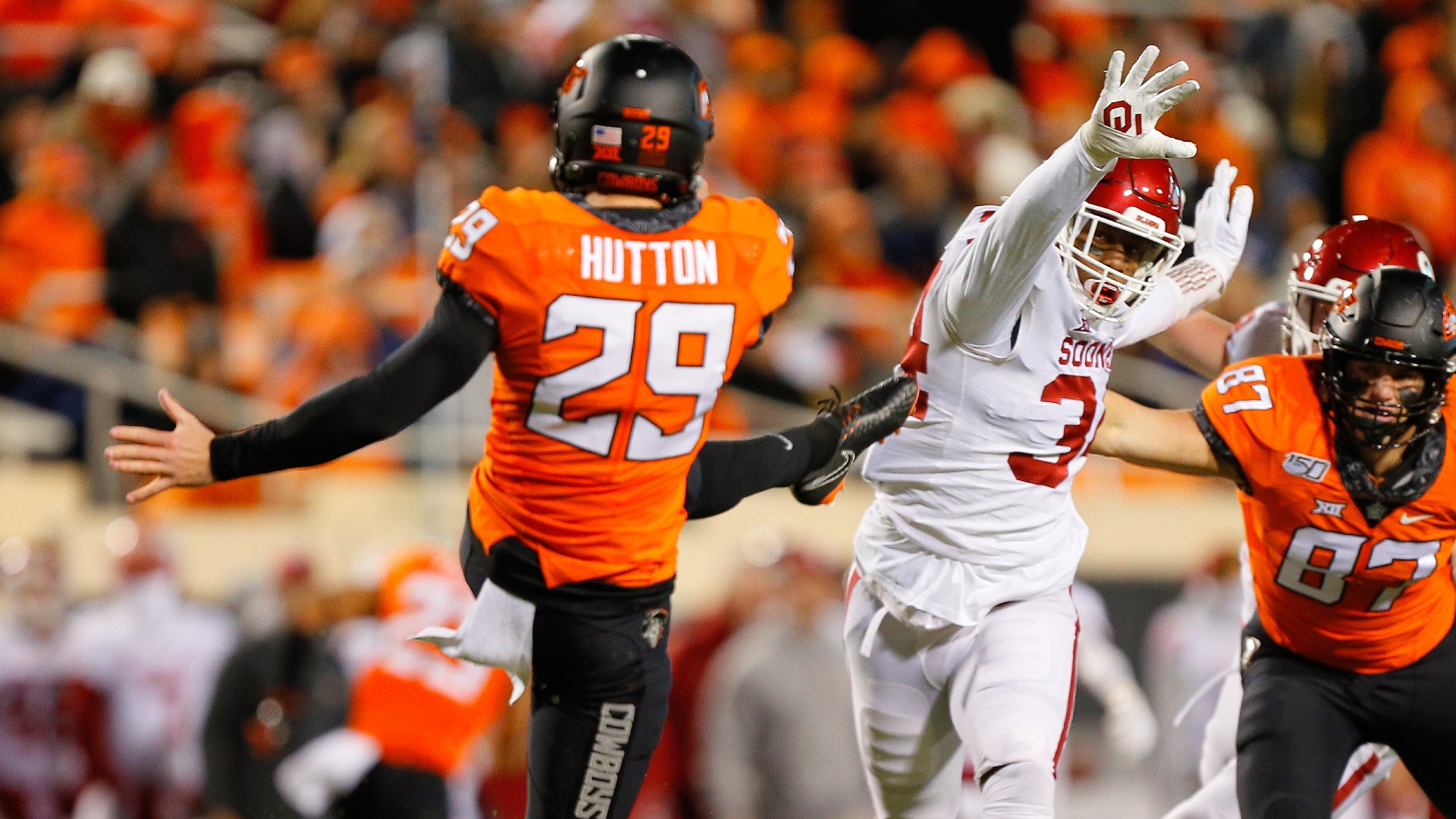 
When the national championship game kicks off on Monday night from Indianapolis, there will be two very interested and proud observers from 9,000 miles away. Nathan Chapman and John Smith, the co-founders of ProKick Australia, will be watching one of their former enrollees punt for No. 1 Alabama.

This isn’t anything new or rare. In fact, it’s quite common.

Alabama’s James Burnip is currently one of 56 Australian punters in the FBS who were trained at ProKick Australia. The academy has grown to the point where it’s a vital piece of the college football landscape, and players who have never played a down of American football before entering college are influencing programs (and championships) across the nation.

That’s just what Chapman envisioned when he started it in 2007, he just didn’t think it’d take 15 years for ProKick to become what it is.

“A part of what we did 10 or 15 years ago was to set out to change the dynamics of punting itself and change the respect punters are given within a team and by coaches,” Chapman told Sporting News. “We wanted to have them know if you’ve got a good one, you love them, because they get you out of trouble.”

Plenty of Chapman’s products have gotten plenty of teams out of plenty of trouble.

Understandably, it was a slow start getting an academy off the ground that would train athletes for a sport that is played on the other side of the world. When ProKick was in its infancy, hardly anyone would take Chapman’s calls. That included in Australia, too.

“It was pretty hard, right? We had to sell initially — ‘Hey, Mr. and Mrs. Smith, nice to meet you. We want to send your son to America to get a degree and punt at college.’ It’s quite easy for them to go, ‘Great, no worries, sounds good. How long have you been doing it?’” Chapman told SN. “Then we had to tell them, ‘Well actually you’re the first time we’re doing it.’ So it was an interesting challenge at the start to get families on board.”

He ran into similar situations with coaches, though he had a few early connections from his time on tryouts with the Packers and Bears following his pro career in Australian Rules Football.

“Conversely on the other side to an American coach, it was ‘Hey, Coach, thanks for picking up the phone. You have no idea who I am. I’m starting up a business in Australia teaching guys how to kick. If I teach them how to kick, how about you give them a scholarship? Oh, by the way, you can’t see him and they won’t come over and visit. You’ve just got to take my word.'”

Eventually, they did take his word and Chapman got a few takers early. Jordan Berry was one of three enrollees in 2007 at 16 years old, went to Eastern Kentucky at 18 and has been punting in the NFL with the Steelers and Vikings since.

So now, Chapman had proof of concept that what he was doing worked, and ProKick was on its way to becoming what it is today.

The athletes generally go through a 12- to 18-month training program dealing with everything from learning the rules of the game, playing with football equipment for the first time and understanding the optimal way to punt an American football that maximizes length and hang time. Punters train three or four times a week in a park and most appreciate the no-frills approach favored by Chapman and Smith.

Nearly all of the punters who come through ProKick have some background in Australian rules football, where the primary way to advance the ball down the field is to punt it to your teammate. That’s why Australian punters tend to take a few running steps off to the side before kicking it as opposed to American punters, who take one or two steps forward before the kick.

It’s a skill that’s acquired at an early age in Australia and one which Oklahoma State’s Tom Hutton never thought he’d get to show off at the next level.

At 31, Hutton just finished his junior season with Mike Gundy’s squad. After working full-time in a paper mill and being financially secure, Hutton, who had always been athletic, decided to give ProKick a chance. After training for over a year, he eventually got to Stillwater at 29.

Being an older freshman and devoting time to training and honing their craft isn’t a rarity for Australian punters. Iowa’s Tory Taylor, Cincinnati’s James Smith, Hutton and Rutgers’ Adam Korsak all came stateside and were freshmen when they were around 21 or 22. It might not seem like a lot, but those few extra years seem to make all the difference.

“This is professional sport with the level of expectations. Take the money out of it. It’s professional sport — there’s people who gamble on it, there’s fans who go crazy and if they don’t like what you do, they send you stuff on social media,” Chapman said. “A 17 or 18-year-old who’s had a good day kicking a football for a kicking coach who’s said you need to take this guy, not worried about the overall holistic approach — he’s not ready. He’s gonna crumble if it’s too big under pressure.”

As it turns out, Chapman’s guys don’t crumble under the pressure. Since 2013, six Ray Guy Award winners have trained at ProKick in addition to several all-conference and All-American punters.

Mike Gundy saw that first hand when Oklahoma State was playing Texas and the Longhorns had Australian Michael Dickson, now with the Seahawks. Dickson performed well against Oklahoma State and from there it became a classic case of you don’t know what you want until you don’t have it.

That’s how Hutton wound up in Stillwater.

‘[Coach] Gundy said to our special teams coach at the time that we need to get an Australian punter and then that just happened to be around the time that I’d started punting with ProKick,” Hutton said. “I think I was one of the only left-footers there and I was also the only guy that was like over 18 or 19. They wanted someone that was a little bit more mature so they wouldn’t get homesick easily.”

New Notre Dame special teams coach Brian Mason has seen firsthand the value of maturity, as he has experience with Australian punters dating back to previous stops at Cincinnati and Ohio State.

The older punters, Mason says, make him more confident in his unit anytime they’re on the field.

“Most of the Australians coming over are 20, 21 years old. Some are even older in rare exceptions. So now you’re getting somebody that has, in a lot of cases, already played professional Australian rules football, is already a little bit more mature and has handled a lot of different situations,” he said. “So even when they’re a freshman, you’re a little bit more comfortable with them going out there and knowing they can handle the pressure and the anxiety of the different situations.”

MORE: Betting trends to know ahead of Georgia-Alabama rematch

The pressure isn’t always external, either.

In the case of Korsak, one of three finalists for this year’s Ray Guy Award, he challenged himself to be successful right away.

“I placed high expectations on myself and I think that’s a healthy thing because it gets back to that thing of never being satisfied,” Korsak said.

Korsak, like many of his ProKick compatriots, has been wildly successful. He was an All-American this year and is a three-time All-Big Ten honoree. He’s also one of the more popular figures on the team, which hasn’t always been the case with punters. Iowa special teams coach LeVar Woods says Taylor is a rock star in Iowa City.

“Just knowing him and the type of person he is and the type of teammate is, that’s what makes it so rewarding because he’s such a great person,” Woods said. “To see the way our fans have embraced him, the way that people absolutely go nuts. When they announce the starting lineup and they announce Tory Taylor, the place goes crazy.”

Taylor admits, he drowned it at first, but eventually it became impossible to ignore.

“The one thing I’m good at is really narrowing in and focusing on the 10 seconds or so that I’m out there,” he said. “I’m not gonna lie. It’s pretty special. It took me a while to really soak it up because I try to ignore most of the noise from everyone else, but it’s kind of hard not to notice.”

The novelty (and productivity) of the Australian punters sparked the growth of ProKick that relied mostly on word of mouth recommendations of players that had come out of the academy.

Coaches copy what works and teams want every edge they can get. It seems, at least for the time being, Australian punters may be that next edge.

And as perceptions change about special teams and its importance and as it becomes more and more emphasized, Chapman has created a brotherhood that’s hundreds of people deep in a country 9,000 miles away.

“You’re changing the game of college football with just the success that we’ve had in terms of the Ray Guy or all-conference representation and now also filtering into the NFL,” said 2018 Cincinnati All-American James Smith, who hopes to make an NFL roster in 2022. “To be a part of that process that changed the way punting is looked at in college football, it’s really miraculous. And it’s a privilege to be a part of that.”