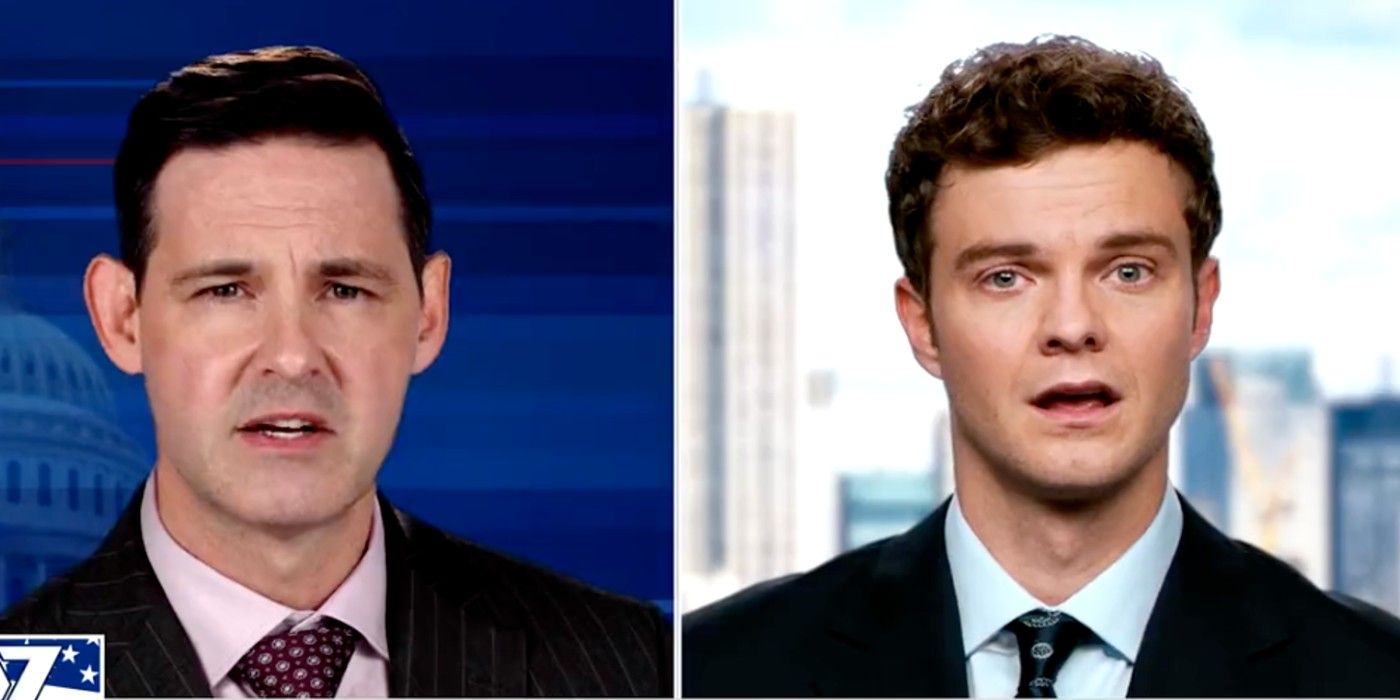 A new Vought News Network video shows host Cameron Coleman grilling The Boys’ Hughie Campbell about a superhero witch hunt. Amazon Prime’s hit superhero series, based on the graphic novel of the same name by Garth Ennis, follows a vigilante group of unpowered humans who try to take down Vought International, a corrupt media conglomerate that promotes the “Seven,” a team of immoral superheroes. Season 2 of the show garnered critical praise for its shocking moments and subversion of typical genre tropes and drew several award nominations, including Best Outstanding Drama at the Primetime Emmy’s.

The last audiences saw of Hughie (Jack Quaid), Billy Butcher (Karl Urban), and the rest of the Boys Hughie had split off from the group to join the ranks of Senator Victoria Neuman, played by Claudia Doumit. After the group succeeds in exposing Stormfront (Aya Cash) as a Nazi and saving Butcher’s family from the nefarious Homelander (Antony Starr), Hughie decides that he wants to continue fighting Vought “the right way.” Unfortunately, Neuman’s suspicious appearance outside the home of Church of the Collective leader, Alaistar Adana (Goran Visnjic), whose head explodes, means that Hughie and Butcher could come back together sooner than either of them expects.

Vought International‘s newest installment of the mock “Seven on 7” program gives fans a look at Hughie firmly in the role of Senior Analyst of the Federal Bureau of Superhuman Affairs (FBSA), Senator Neuman’s newly-coined task force. Coleman leads off by touting “fair and balanced” reporting before trying to trap Hughie with a series of disingenuous questions about why the FBSA “hates superheroes” and is leading a witch hunt against them. Coleman also brings up the topic of Ezekiel, a Christian superhero shown having sexual relations with other men earlier in the show and who is being charged by the FBSA for abuse and misconduct. Check it out below:

Cameron Coleman. Hugh Campbell. The groundbreaking interview that can’t wait for your DVR. That and much more, only on Seven on 7. pic.twitter.com/Io68ev9QBj

Hughie, donning an atypical suit and tie, tries to rebuff the pressing “Seven on 7” host, citing analytical data and witness evidence. The interview is cut short by Coleman as the former Boy once again declares the Bureau’s mission to hold superheroes accountable for their actions. The program is notorious for vehemently defending the Seven and Vought International, even the evil Stormfront, who planned to create a Reich of superpowered individuals.

As Hughie settles into his role by the mysterious Victoria Neuman’s side, more “supes” are bound to be exposed by the FBSA, which could create some interesting plot threads in season 3. Neuman herself could also be the assassin blowing up peoples’ heads, though her motivations remain unclear. With the added trouble of several new supes primed to join The Boys when season 3 premieres on June 3, 2022, Hughie and the FBSA could find themselves in even more hot water.

Bart Woinski is a writer, podcaster, and filmmaker from Metro Detroit. He is a new addition to the Screen Rant Core News team but a lifelong and passionate fan of cinema and TV. Along with writing for Screen Rant, Bart is an aspiring feature screenwriter and hosts the horror entertainment podcast Grave Discussions.

When he isn’t watching something or writing, Bart enjoys spending time with his girlfriend and their dog, Rupert, playing video games, reading, and playing disc golf.