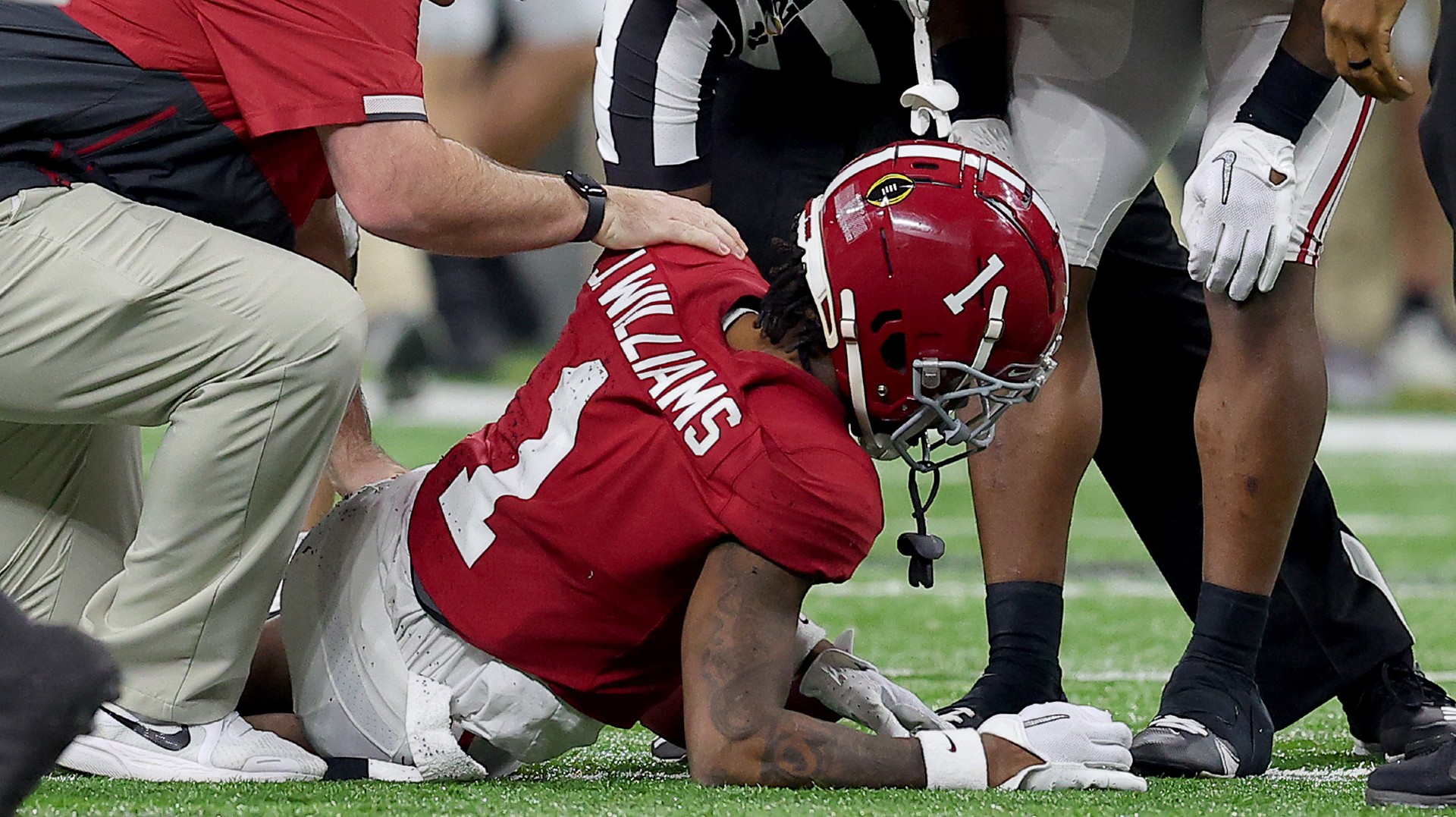 INDIANAPOLIS — Alabama came into the national championship game with only one of their two best-performing receivers this season. Jameson Williams was starting, but John Metchie III was not in uniform after suffering a torn ACL in the SEC championship last month against Georgia.

Alabama lost the second half of their dynamic receiving duo late in the second quarter. Williams came down with a non-contact knee injury on a 40-yard pass play, and never returned.

It was a heartbreaking end for the Ohio State transfer, who blossomed into a star in Tuscaloosa and was one of the keys to Alabama’s win over Georgia in the SEC championship game. The partisan crowd got quiet when he went down, then joined together to give him a loud ovation when he left the field. He heard from the Alabama faithful when he returned to the locker room for further evaluation.

Before Williams left the game, he had 65 yards on four catches, leading Alabama at the time. He also had the longest play at that point with his 40-yard catch. That play led to a field goal that gave Alabama a 6-3 lead.

“Losing someone like J-Mo is tough,” Alabama quarterback Bryce Young said in the postgame press conference. “But that’s been a theme for us is overcoming adversity. A lot of guys stepped up in a big moment, and those guys that we were used to. And I’m tremendously proud of how we played offensively, how people stepped up.”

Young did his best to adjust, finishing with 369 passing yards, but the Tide eventually were overtaken by Georgia in the fourth quarter and fell 33-18. The game was sealed when, one play after Alabama dropped a potential first-down catch inside the Georgia 20, Young threw an interception that was returned 79 yards by Kelee Ringo.

Throughout the game, Young looked to tight end Cameron Latu the most. Latu ended the night with 102 receiving yards and Alabama’s lone touchdown. Latu’s highest receiving night for the season before Monday night was 58 yards back in November.

Agiye Hall, who previously had 20 receiving yards this season, finished with 52 yards on two receptions. Hall had a 28-yard reception in Alabama’s nine-play drive in the beginning of the third quarter, which also ended with a field goal.

With regard to the players who stepped up, Tide coach Nick Saban thought their experience in the game will help them improve for next season.

“I think it will help them a lot [heading into next season],” Saban said. “I think these kinds of experiences are invaluable in terms of — the thing that’s tough about it is we played some guys tonight that didn’t get to play much during the season. So they didn’t have much experience going in. And they had some opportunities and they made some plays. And I’m sure that will help their confidence. And they’ll grow and learn from this. And it will be a positive experience for them and their development in the future.”

Young led Alabama to a 17-play, 7 1/2-minute drive in the third, moving the team from its 2-yard line to Georgia’s 30. The drive ultimately ended with a blocked field goal attempt.

Alabama has run 27 plays for 139 yards on their last two drives, and they have three points to show for it.

Young outgained Georgia’s Stetson Bennett in the air by 145 yards, but only threw the one touchdown pass. And Young was tackled for a loss on a two-point attempt after his touchdown. Alabama couldn’t overcome Georgia’s defense — Young threw two interceptions and was sacked four times.

“It’s on me to perform better,” Young said. “People stepped up in big moments when they were supposed to. And we had chances, had opportunities. And at the end of the day I didn’t get the ball into the end zone. And that’s on me.”

After Alabama’s one touchdown, Georgia then scored 20 unanswered points to take the national title. Alabama’s last three drives resulted in a three-and-out drive for minus-2 yards, the pick-six and a seven-play, 16-yard drive as time ran out.

Williams, who is a junior, hasn’t declared for the NFL Draft, and it’s unclear what role his injury will play in that decision.