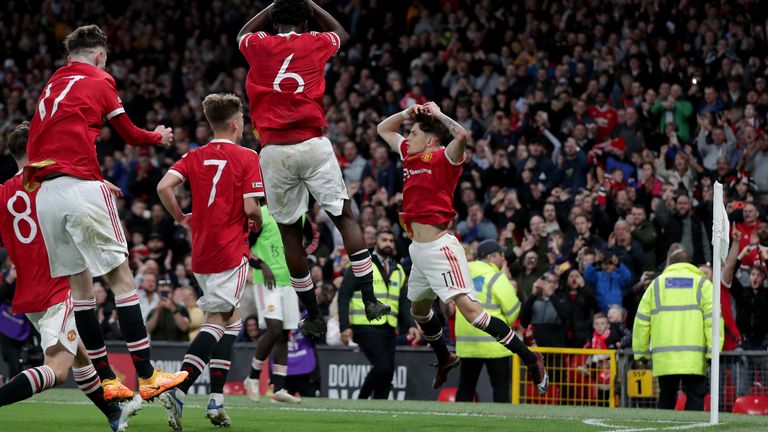 
Alejandro Garnacho fired Manchester United to their first FA Youth Cup win since 2011 as Nottingham Forest were edged out in front of a record-breaking crowd at Old Trafford.

There were 67,492 in attendance for Wednesday’s final, smashing the competition’s previous record of 38,187, as the United’s teenagers provided a much-needed boost at the end of a wretched season for the club.

United captain Rhys Bennett’s opener had been cancelled out when Joshua Powell’s shot all too easily beat Radek Vitek just before half-time, but Travis Binnion’s U18s were not to be denied.

Garnacho replicated Cristiano Ronaldo’s celebration after firing home a penalty – wrongly awarded as he had been fouled by Zach Abbott outside the box – and struck a deflected stoppage-time effort to seal a 3-1 victory.

The 17-year-old made his first-team debut last month and starred on the run to the final, where Warren Joyce’s Forest made the hosts sweat on their way to winning the competition for a record 11th time.

A banner reading the ‘Class of 22’ was held up in the Stretford End at full-time, just as it was before kick-off.

Impressive Kobbie Mainoo showed good skill in the opening seconds before getting away a shot, but Forest are no slouches and captain Jamie McDonnell powered a header just wide of the far post soon after.

The travelling fans were making themselves heard, only to be silenced in the 13th minute.

Sam Murray swung over a free-kick that United skipper Bennett met with a glancing header that beat Aaron Bott. The centre-back grew up eight miles away from Old Trafford in Denton and enjoyed the moment.

Forest have won every match since shocking Chelsea at the semi-final stage and looked for a quick response as Dale Taylor saw an acrobatic attempt denied and Justin Hanks powered a header over.

United eventually settled and ended the opening period on top as Garnacho curled wide, only for Powell’s hopeful strike from the edge of the box to beat Vitek just before the break.

Binnion’s hosts began the second half with the bit between their teeth as both Charlie McNeill and Marc Jurado were denied, but Forest grew back into the final.

But the hosts dug deep and their newly-crowned U18s Player of the Year would eventually see United to victory.

Garnacho kept his cool to fire home his penalty in front of the Stretford End, then completed the victory when his fine run was ended by a deflected strike in stoppage time.