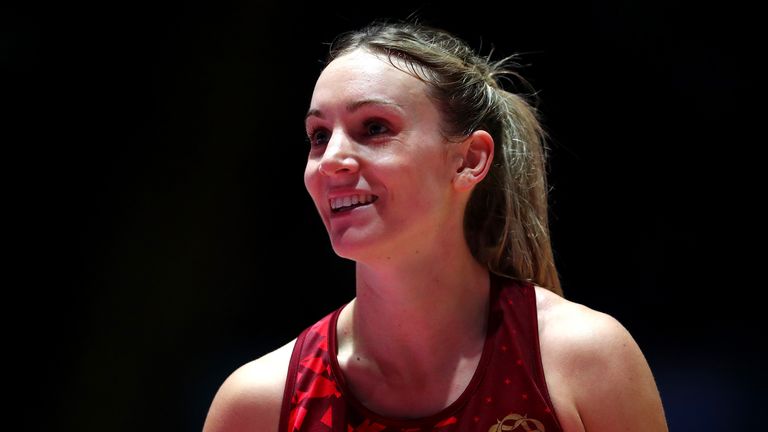 Nat Metcalf has been announced as England’s captain for the Commonwealth Games and leads an experienced squad aiming to defend their title in Birmingham this summer.

Team England famously won a gold medal in dramatic style on the Gold Coast in 2018, with Helen Housby taking the match-winning shot in the final seconds against world leaders Australia.

The gold medal was England’s first in a netball competition at the Commonwealth Games. The competition comprises of the world’s leading netball nations and is a pinnacle competition in the sport, with netball not currently being part of the Summer Olympics.

As captain for this summer’s competition, Metcalf steps into the shoes of Serena Guthrie, who announced her pregnancy earlier this season and her retirement from the sport.

Metcalf was a pivotal part of Manchester Thunder’s perfect season to win in the Vitality Netball Superleague and has led England as captain before, with great success.

“Growing up I always wanted to play for England and being asked to captain the team is more than I ever could have imagined,” the Manchester Thunder mid-courter said. “I feel truly honoured to have been asked and I hope to do everyone proud.

“To get the chance to represent Team England at home in front of our amazing fans is so exciting. Having the opportunity to wear the red dress for England is always an honour and I can’t wait to see what we can do as a team together in Birmingham.”

Housby returns with fellow Australia-based shooter Jo Harten, who has been named as vice-captain. Thunder’s Eleanor Cardwell will enjoy her first experience of a Commonwealth Games and complete England’s main shooting options.

Sophie Drakeford-Lewis adds versatility by being able to perform across the goal attack and wing attack positions. Laura Malcolm also gives head coach Thirlby a number of options, with her ability to perform strongly wearing any one of the three mid-court bibs.

Beth Cobden and Jade Clarke are two of the seven squad members returning who were victorious on the Gold Coast at the 2018 Commonwealth Games.

Clarke is England’s most-capped international. She will add to her 185 caps in Birmingham and the tournament will be her fifth Commonwealth Games, after making her competition debut in 2006.

In defence, Thirlby has brought together more of England’s most experienced individuals. Layla Guscoth will run out in front of a home crowd in Birmingham and look to put her injury disappointment at the 2019 Netball World Cup behind her.

Geva Mentor, who was first selected for England in 2000 and has 153 caps, is selected alongside Eboni Usoro-Brown and Stacey Francis-Bayman. The trio will all arrive in Birmingham bringing great insights from playing their domestic netball in Australia’s Suncorp Super Netball competition.

Imogen Allison, Funmi Fadoju, George Fisher and Hannah Joseph are named as England’s reserves for the competition which starts on July 29.

England are in Group B alongside Trinidad & Tobago, Malawi, Northern Ireland, Uganda and New Zealand. The team will open the tournament and play in the opening match on the first day against Trinidad & Tobago at the NEC Arena.

“The squad allows us the positional coverage and diversity to be able to counteract any of our toughest opposition,” Thirlby noted.

“Every single player knows what finals netball looks like and what’s required, with many coming off the back of those within their domestic seasons both home and overseas which is invaluable.

“With those experiences we can continue to build momentum in our final prep and the collective leadership across this 12 is outstanding and one of our greatest strengths.

“We look forward to playing in another big tournament and representing our fans on home soil so soon after Liverpool in 2019, something unlikely to happen again in our lifetimes and one which we are not taking for granted.”

The squad has now flown to South Africa for a training camp, the Australia-based members will meet up in a couple of weeks’ time following the conclusion of Suncorp Super Netball’s final series.