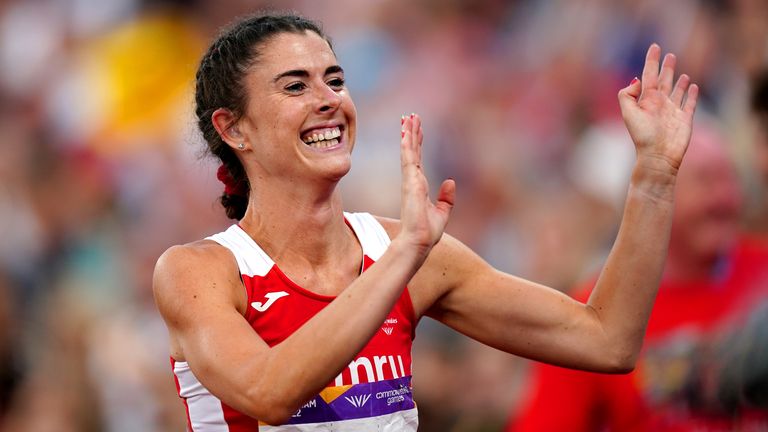 Olivia Breen admitted her shock at making her own piece of Commonwealth Games history with her gold medal in the T37/38 100 metres.

The 26-year-old became Wales’ first female track and field competitor to win gold since 1990 when she got the better of Great Britain Paralympic team-mate Sophie Hahn in the final at Birmingham’s Alexander Stadium on Tuesday.

Former Sky Scholar Breen ran a personal best of 12.83 seconds to finish ahead of Hahn and bronze medallist Rhiannon Clarke of Australia and was left speechless after finding out just how long it had been since another Welsh female athlete had achieved that success.

“I saw that in the morning at 2am and I was like ‘holy moly, wow!’,” Breen told Sky Sports News. “I was quite shocked when I saw that and quite baffled, but it’s an amazing honour.

“Obviously it’s been 10 years of hard work, but I knew I was in good shape and I wanted to do it on the day.

“I beat Sophie a few weeks ago at an open meet and I had the confidence in myself that I was capable of doing it.

“Some people have good days and bad days, but I’m really glad that it all came together in front of a home crowd and friends and family. It was just amazing.”

This year’s Commonwealth Games features eight parasport categories among the track and field events and Breen, who won gold in the T38 long jump at the 2018 games on the Gold Coast as well, is delighted her and other para-athletes are able to star on this stage.

However, she is in no doubt the Paralympics, in which she competed in both 2012 and 2020, should remain a standalone event.

“It’s really good and it’s a good incline for people to see Paralympic sport,” Breen said. “It’s a really nice vibe, and everybody was so nice to us and supportive.

“I definitely think it’s good to have the Paralympic and the Olympics separate, but the Commonwealth Games is special because it has the two together and it’s been a really nice atmosphere. I’m really glad I that it all came together in front of a home crowd and friends and family. It was just amazing.

“When the Olympics finishes, the Paralympics is a month later and for people to learn about disabilities is really important.

“For us as well, the Olympic guys are really good, but we do things in a different way and it’s important for the public to see that as well and for us to have their support.”

Breen’s success comes at a time where women’s sport is in the spotlight on the back of the success of the recent Women’s Euro 2022 football tournament.

She has seen much progress for both women’s and disability sport since she started competing and while acknowledging there is still more to do, Breen encouraged girls to try as many sports as possible.

“It’s getting better, but there are still improvements to make and I hope in the next few years there will be a big improvement which would be really exciting to see,” Breen said. “I think it’s an exciting future for us.

“It’s good for young girls to try all different sports because you don’t know which one you will like until you try. Do everything you can and find your passion, and don’t ever give up because it will come.

“It’s taken me 10 years to win my first gold medal in the 100m. You will have days where it’s like ‘Why am I doing this? I can’t be bothered’ – trust me, keep doing it and your time will come.”