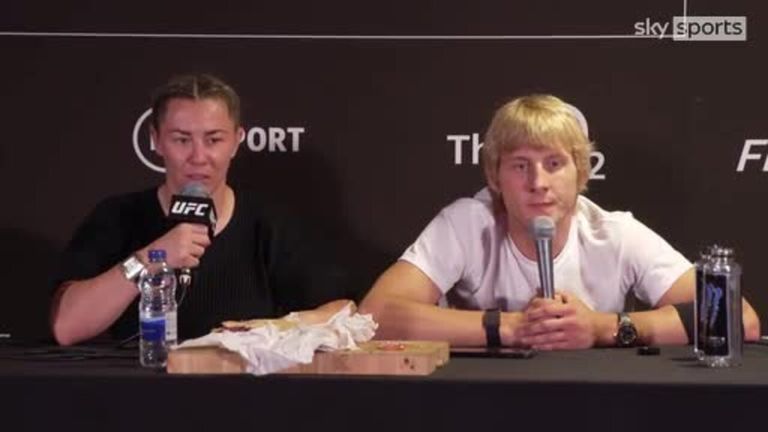 
MMA fighter Paddy Pimblett says “people with a platform should be trying to help” as he told Sky Sports how overwhelmed he has been by the responses since he spoke out about men’s mental health following the suicide of his friend.

The 27-year-old dedicated his victory over Jordan Leavitt at London’s O2 Arena last month to late friend Ricky, whose death the Merseysider had learnt about hours before the pre-fight weigh-in.

Pimblett said after his win in the second round: “There’s a stigma in this world that men can’t talk. Listen, if you’re a man and you’ve got a weight on your shoulders, and you think the only way you can solve it is by killing yourself – please speak to someone. Speak to anyone.”

Talking to Sky Sports on Tuesday, Pimblett said: “I feel people in a position like me with a platform should be trying to help people.

“It’s nice to be nice and me grabbing the mic and saying that on interview cost nothing. Other people are too concerned about their own image and money in the bank to do stuff like that.

“I have had loads of messages, people saying ‘without you, I wouldn’t even be here now’.

“Messages like that will mean more than any win ever will, someone saying, ‘I didn’t take my life last night because of something you’ve said’.

“It’s not something I ever wanted to do. I just wanted to go and fight. I like being punched and punching people and entertaining at the same time, that’s what I’m good at.

“But there are bigger things in the world that aren’t getting addressed and I just thought I’d mention something. There is more of a purpose than just fighting.

“It’s not just Ricky, multiple lads in Liverpool have taken their own life. Some that I know, some that I don’t know. It’s something I have seen a lot lately. You see it all over social media. It hit me like a ton of bricks when it happened with Ricky.

“I hadn’t seen him for two or three months. I am not going to sit here and say he was one of my best mates but he was an acquaintance I had and if I saw him out and about we’d stand there for 15 minutes talking.”

Pimblett also took the opportunity to apologise for “stupid stuff” he has previously posted on social media.

He added: “I have been abused several times in the past [on social media] and I have given it back. Looking back now, I think, ‘why would you even get involved in that?’. I have said stupid stuff I regret.

“For anything I have said in the past, I am sorry. It was me being a daft kid. As you get older you think, ‘what were you up to, lad?’.