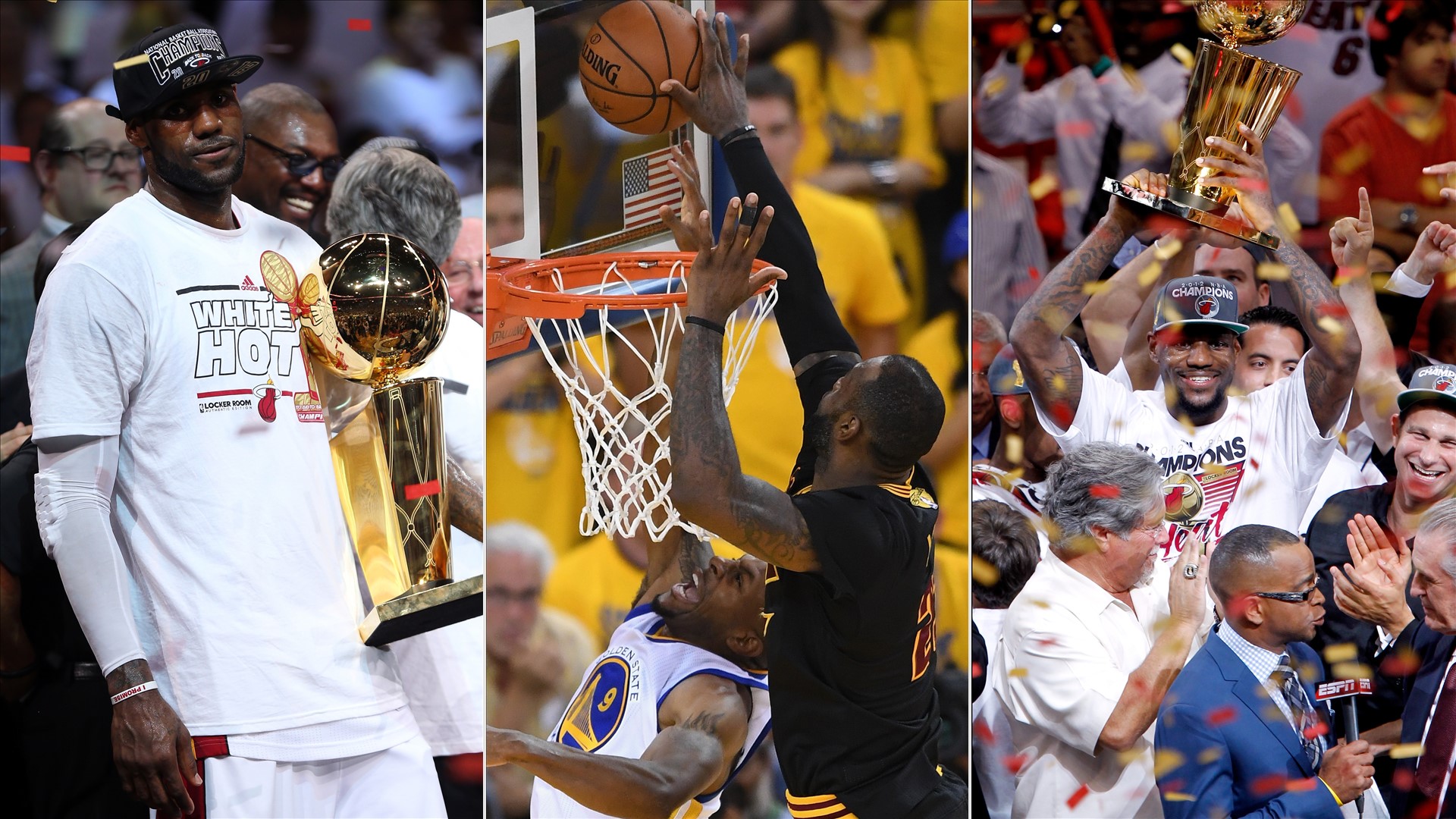 Scott Rafferty (@crabdribbles): Before the end of the year, members of The Sporting News team ranked the 50 greatest seasons in sports history.

You can read all about the process and see the full results here, but I wanted to focus on one particular NBA player who cracked the list.

Landing in the No. 28 spot was LeBron James. No surprise there — we’re talking about one of the most accomplished athletes of all time — but it’s the season that was chosen (2012-13) that could be a source of debate.

With that in mind, I ask you, Gil: Did we get the right LeBron season or is there another one that you think is more deserving?

Gilbert McGregor (@GMcGregor21): Wow. At first, I thought it would be easy to single out which individual season is the most impressive of James’ career, but then I’m reminded that he has so many.

When I think of James at the peak of his powers, I immediately envision him in a Heat uniform, however, I’m not so sure I wouldn’t give a slight edge to the 2011-12 season.

James won the third MVP award of his career in 2012, posting averages of 27.1 points, 7.9 rebounds and 6.2 assists, which is essentially the same stat line as that 2012-13 campaign, save for one assist. What sets that season apart in my mind is that it culminated in a title that almost didn’t come to be, thanks largely in part to his legacy-defining 45-point performance to stave off elimination in Game 6 of the 2012 Eastern Conference Finals.

I’m well aware that this is to take into account a season in its entirety and not a singular moment, but that Game 6 represented the pressure James was playing under for that entire season after coming up short in the 2011 Finals. The 2011-12 campaign gets the edge because he delivered time and time again despite an inordinate amount of pressure and scrutiny.

Rafferty: You sort of got what makes this such a tricky debate for me. 2012-13 may very well be LeBron’s best season from start to finish, but there are other seasons that come to mind first for me because of particular moments or stretches.

2015-16 is obvious because it was one of the best Finals in NBA history, with LeBron leading the Cavaliers from a 3-1 deficit against the 73-9 Warriors to bring Cleveland its first championship in what felt like forever. (It was the first in 52 years.) His averages over the last three games? 36.3 points, 11.7 rebounds, 9.7 assists, 3.0 blocks and 3.0 steals.

2017-18 didn’t end in a championship, but I feel like that was LeBron at his singular best. If you need to be reminded, he averaged 34.0 points, 9.1 rebounds and 9.0 assists in the playoffs while leading a Cavaliers team that wasn’t that great to the Finals.

The Warriors swept the Cavaliers in the Finals, but James delivered one of his greatest performances ever in Game 1, exploding for 51 points.

McGregor: I honestly didn’t even think about 2017-18 right away, but you make a great point. That might not necessarily have been his best season, but I’m not sure I’ve ever seen him perform at a higher level.

You mentioned the 51 vs. the Warriors and there were also games of 46 (twice), 45, 44 (twice), 43 and 42 points during that same playoff run. Not to mention two buzzer-beating game-winners.

Him being at his absolute best has to count for something, right?

Rafferty: And to delve a little deeper, that 45 point game was in Game 7 against the Pacers in the first round. He then scored 46 points in Game 6 of the Eastern Conference Finals to force a Game 7, only to go off for 35 points, 15 rebounds and nine assists in Game 7 (on the road in Boston!) to advance to the Finals.

It felt like LeBron was a man among boys during that entire run.

In addition to their loss in the Finals, the problem with that season is the Cavaliers were quite up-and-down heading into the playoffs. LeBron was still fantastic, but he’s had more memorable regular seasons.

McGregor: Very true, that was the season in which the Cavs essentially traded for an entirely new team at the trade deadline, finished fourth in the East and barely scraped by in the postseason, aside from the inexplicable sweep of the top-seeded Raptors.

I guess that brings me back to the team success aspect of it. I know the title is what gave 2012-13 the edge over 2008-09, but it almost feels like it’s worth circling back to that season from the first Cleveland stint. A title is a team accomplishment and I think it’s fair to say that the 2012-13 Heat had a bit more talent than the 2008-09 Cavs.

Rafferty: I’m glad you mentioned 2008-09. LeBron earned the first MVP award of his career that season and went absolutely berserk in the playoffs.

I mean, look at these numbers: 35.3 points, 9.1 rebounds and 7.3 assists on 51.0 percent shooting from the field over 14 games. As you said, it didn’t end in a championship, but he almost averaged a 40-point triple-double in Cleveland’s Eastern Conference Finals matchup with Orlando.

He wasn’t the problem in that series.

Last but not least, I do want to give a hat tip to his 2019-20 season. It was a weird season because of the COVID-19 pandemic, but LeBron was nothing short of spectacular in the Finals, leading the Lakers to the championship.

Anything else you want to bring up? Otherwise, I think it’s time we ranked our top three LeBron seasons…

McGregor: I might as well round it out and give a quick shout to his other MVP season, the 2009-10 campaign. Not only did he average a shade under 30 points per game, but he did so shooting over 50 percent for the first time in his career and dished out a then-career-best 8.6 assists per game.

Just wanted to put that out there. And the fact that I’ve got an eye on his absurd numbers in the 2021-22 campaign. I honestly probably could make a case for any of his seasons aside from his first in LA.

So before I get carried away, I agree. It’s time to rank the top three.

Rafferty: Just when you think LeBron is about to slow down…

OK, for me personally, I think the order is:

McGregor: I’m similar but different. The way I rank it is:

I’m on the same page with respect to the toughest omissions. That 2015-16 season really signified the shift of LeBron taking his mastery of the game to yet another level, which was on full display in 2017-18.

It’s fitting that we ultimately went with championship seasons each time.

Rafferty: So we got it wrong! Well, kind of. We don’t agree on what his best season is, but we do agree that the 2012-13 season is his second-best all time. And really, we’re splitting hairs here. It speaks to how incredible LeBron is that we’re even having this discussion to begin with. And he’s still going!

It feels like we say it every few months, but don’t take him for granted.