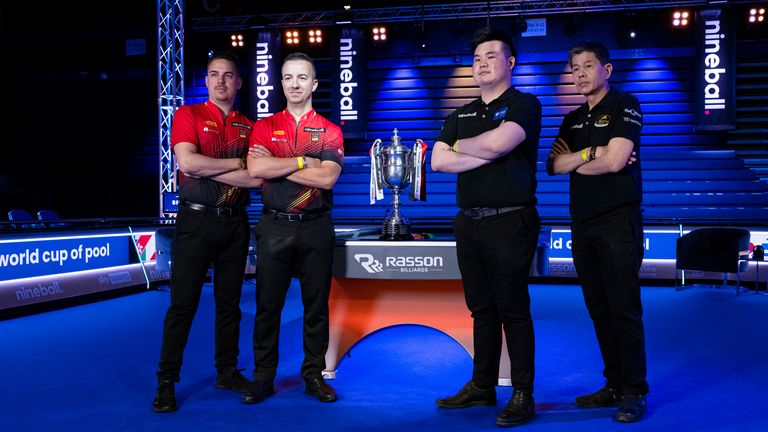 
Spain beat Singapore 11-6 to win 2022 World Cup of Pool; team of David Alcaide and Francisco Sanchez Ruiz win the competition for their country for the first time; Spain reached the final at a canter dropping only eight racks; Alcaide said: “This moment is amazing for us”

Spain have won the 2022 World Cup of Pool, winning the competition for the first time after beating Singapore in the final 11-6.

The Spaniards, led by David Alcaide and Francisco Sanchez Ruiz, reached the final at a canter dropping only eight racks ahead of their match up with Singapore’s Aloysius Yapp and Toh Lian Han for a shot of glory.

Alcaide and Sanchez Ruiz won the lag and from there it was a plain sailing opening rack despite it being unconventional with a few early nerves from the duo. Into the second rack and despite a weak break by Alcaide’s standards, he kept Singapore hooked at his next chance at the table to tuck the cue ball behind the five and keep the two the opposite side. Lian Han fouled and from there it was a routine Spain run out for 2-0.

Into the third and Sanchez Ruiz broke dry which opened Singapore their moment to take their opening rack only for Yapp to leave no angle on the Lian Han. From there, Alcaide and Sanchez Ruiz came back to the table to keep the break in their hands at 3-0 and soon 4-0.

Singapore had their chance after Alcaide fouled when jumping to make the three. Lian Han and Yapp swooped in to cut the initial deficit to three. Before too long that was two as Yapp and Lian Han found stroke.

Lian Han’s safety error was poor in the seventh rack and Sanchez Ruiz and Alcaide pounced to establish a three-rack buffer and nearing the halfway stage of victory. That halfway stage was soon reached at 6-2 to Spain.

In the next rack, Yapp went for an ambitious 2-9 combo kicking the two up table only for it to not come off, but the best was yet to come for the US Open runner-up, who made an expert jump to pot it before clearing up the table with Lian Han to be 6-3 back.

With Lian Han breaking in the 10th rack, Lian Han left with no shot and Spain came good again to move to seven racks two despite a stroke of fortune from Sanchez Ruiz who banked the one ball into the opposite corner than intended after it had caught the other pocket. Alcaide broke dry in the following rack and Singapore were reducing their comeback further at 7-4.

Singapore had not really done too much wrong despite the scoreline and a break and run in the 12th rack showed just that as they came back into it at 7-5 and soon 7-6.

Spain were frozen for a short while to their chairs until Yapp scratched on the break as the three kissed the cue ball into the top left pocket. It was a key moment as the Singapore onslaught gathered pace. Alcaide and Sanchez Ruiz had a routine runout from there to be three away from glory. The distance for victory soon became two for Spain after two hooks in the space of two balls behind the brown seven. Firstly, for Spain on the two which they made only to leave it open for Yapp to fire in. That left Lian Han hooked only for him to scratch and give Spain the table to be close to the finishing line.

Alcaide went airborne to pot the one at the start of the following rack only for him to scratch in the process and give Singapore the table back. Lian Han left Yapp short of a clear shot on the seven forcing him to bank it only to leave it in the middle of the table for an exquisite bank shot from Alcaide to help Spain reach the hill.

Sanchez Ruiz broke in the last rack to leave a beautiful 2-9 combo to seal a special victory for Spain.

“To be honest, in the semi-final and final, we were so nervous at times. But when we had tough shots, we played so good.

“I think when you play for a team it’s more special than when you play singles. This is my little brother. We’ve played together for 10 years and worked so hard. This moment is amazing for us.”

“We feel so good right now. We work so hard. We travel all over the world. We dream for one moment like this and we got it today.”