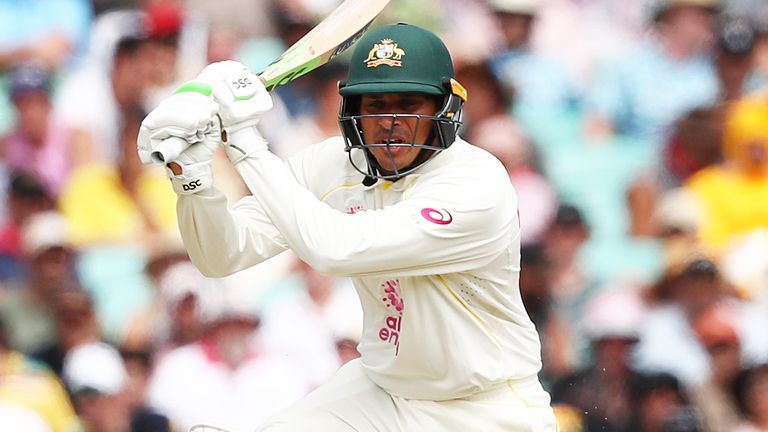 
“Throughout my career, a lot of changes were made and I was on the wrong side of them so I’m the first to say that I think there needs to be structure and stability”; Australia batter Usman Khawaja does not think he will keep his place for Hobart Ashes Test despite twin tons in Sydney

Usman Khawaja says he is resigned to being left out of the fifth Ashes Test despite scoring back-to-back hundreds on his return to the Australia side at the Sydney Cricket Ground.

The 35-year-old left-hander came into the Australia XI for the fourth Test after Travis Head tested positive for Covid-19 and having already marked his first Test since August 2019 with a century in the first innings, he followed it up with an unbeaten 101 on day four in the second.

Having set England an improbable 388 to win, Australia need 10 wickets on the last day to take a 4-0 series lead but regardless of the outcome, Khawaja does not anticipate featuring in Hobart next week.

“At the moment I’m quite resigned to the fact that I’ll probably miss out,” he said.

“That’s just from talking to [head selector] George Bailey about continuity. That’s important, I’m not totally against that process.

“I felt like throughout my career, a lot of changes were made and I was on the wrong side of them so I’m the first to say that I think there needs to be structure and stability.

“I actually like the processes that the selectors have been taking throughout the series so at the moment I’m not really expecting to play the next match.”

Despite spending the first three Tests on the sidelines and carrying drinks, Khawaja has shown few signs of rustiness across his two innings, appearing in complete control as he notched his ninth and 10th red-ball centuries for Australia.

“This game is not easy, you don’t always get games like these, back-to-back hundreds, I wasn’t supposed to be playing this game either,” he told BT Sport.

“Fortune had it that I was in for Heady and it’s amazing how it’s worked out. I couldn’t have written it better myself.”

England sweating on fitness of Stokes, Bairstow and Buttler

Graham Thorpe admits he does not know whether Ben Stokes, Jonny Bairstow or Jos Buttler will be fit for England’s Ashes finale in Hobart.

All three sustained painful injuries during a taxing fourth Test in Sydney, with Stokes awaiting scan results on a side problem while Buttler (left index finger) and (Bairstow (right thumb) both fear that X-rays will confirm fractures.

The trio will all be needed to dig deep and help their team scrap for a draw on day five, with England facing the prospect of 98 overs at the crease when they resume on 30 without loss and 358 adrift.

But for one, two or all three of them, whatever effort they give could be their last contribution of the campaign.

Sam Billings has already been added to the squad as wicketkeeping cover for Buttler and Bairstow, with Saturday’s emergency stand-in Ollie Pope and Dan Lawrence also waiting in the wings.

Assistant coach Thorpe, who is leading the squad while Chris Silverwood completes his Covid-19 isolation, said: “We’ve obviously got some blows. It’s possible [they will miss the final Test] but we will be assessing all of that at the end of the game.

“Obviously, Sam has been called into the group and that’s obviously a good indicator of some of the concerns we have with the injuries.

“But I am sure the lads will take whatever they need to take to get themselves in a position where they are capable of performing on the final day. They will all bat and they will all do their very best, I know that.

“At the end of the game we have to assess who is potentially going to be available. With Stokes, his injury is not a great one being an all-rounder.”