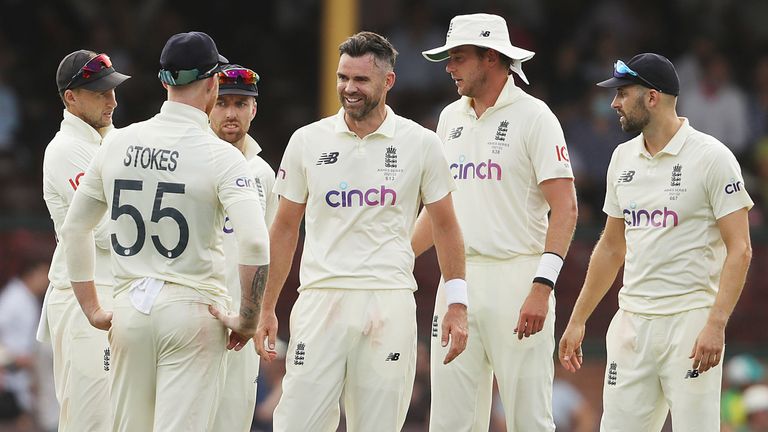 England struck twice in the final session on a rain-hit day one of the fourth Ashes Test to curb Australia’s progress in Sydney.

James Anderson and Mark Wood dismissed Marcus Harris (38) and Marnus Labuschagne (28) respectively in successive overs as Australia slipped from 111-1 to 117-3 before closing on 126-3 on a day on which just 46.5 overs were bowled due to inclement weather.

Anderson and Wood bagged their wickets after the ball was changed midway through the 30th over, before Usman Khawaja (4no off 22) and Steve Smiith (6no off 23) steered Australia through to stumps, which came about 35 minutes early after another rain shower.

Stuart Broad, recalled to the England side in place of the injured Ollie Robinson, dismissed David Warner (30) for the 13th time in Tests when he had the opener caught behind from around the wicket after lunch.

England are 3-0 down in the five-match series and now looking to avoid a 5-0 series sweep, with Australia having retained the Ashes with an innings-and-14-run win in Melbourne last time out.

Joe Root’s side were unable to prise a wicket in the opening session, which was limited to 12.3 overs due to an initial rain delay, as Australia reached 30-0 after electing to bat.

Broad, though, removed Warner for the eighth time in his last seven Tests against Australia after the break – Zak Crawley gobbling up the chance at second slip as Broad snapped an opening partnership of 51 between Warner and Harris.

Broad had been described as a “caged tiger” by England assistant coach Graham Thorpe ahead of the game in Sydney having made only one appearance in the series so far.

The 35-year-old could not build on his breakthrough, with play halted for balls later due to rain and not resuming until 5.20am UK time – after which Harris and Labuschagne took the hosts from 56-1 to 111-1 in pretty serene fashion as their second-wicket stand extended to 60.

England rallied after drinks, striking twice in as many overs, with Anderson and Wood accounting for Harris and Labuschagne.

Harris clipped a ball from Anderson that angled across him through to Root at second slip, while Labuschagne snicked Wood’s back-of-a-length delivery to wicketkeeper Jos Buttler.

Khawaja came out at No 5 for Australia, the 35-year-old making his first Test appearance since 2019 as a replacement for the Covid-hit Travis Head.

Covid has also hit the England camp, with head coach Chris Silverwood among a number of backroom staff in isolation, leaving Thorpe to lead England at the SCG.

Thorpe will be pretty content with the first day’s work in Sydney as his side look to rebound from heavy defeats in Brisbane, Adelaide and Melbourne – the last of which saw Australia retain the urn.

The Sydney Test continues from 11.30pm UK time, while the fifth and final Test – a day-nighter in Hobart – taking place between January 14-18.