Colin Munro’s unbeaten knock of 67 led the Trent Rockets to a commanding win over London Spirit in The Hundred at Trent Bridge.

The left-hander anchored the run chase alongside Tom Kohler-Cadmore after the early dismissal of Alex Hales, hitting 10 boundaries off 37 balls.

Kohler-Cadmore scored 41 off 28 balls before falling late on when it was only a matter of time before the Rockets chased down a very reachable target.

The Rockets had their bowling attack to thank for that, after they limited the Spirit to 122 runs, taking nine wickets in the process. Rashid Khan took three, while Luke Wood, Samit Patel and Sam Cook took a pair each as the Rockets secured an important win.

The Spirit, who began The Hundred with four consecutive wins and started the day with a net run rate of +1.218, have fallen behind the Rockets in that metric with +0.631 and the Spirit now on +0.609, with one game in hand.

Story of the match

Trent Rockets spinners Rashid Khan and Samit Patel launched their side to the top of The Hundred table with a six-wicket home win against London Spirit.

Khan, on his return from international duty, clean bowled three victims for the cost of 25 runs while Patel took the prize wickets of Eoin Morgan and Ben McDermott as they both threatened big scores.

Luke Wood also impressed with economical figures of two for 23 as the Rockets bowled Spirit out for 122.

In reply, Colin Munro’s 67 not out from 37 balls and a confidence-boosting 41 off 28 from Tom Kohler-Cadmore were enough to take the Rockets home with 21 deliveries to spare.

The result gives the Spirit their first loss of the tournament and puts the Rockets in prime position to finish in top spot.

Put into bat, London got off to a flying start as Daniel Bell-Drummond caught the eye early on with consecutive sixes.

The Spirit did lose the in-form Adam Rossington cheaply, but at 41 for one from the powerplay, they would have been the happier side.

The next 25 balls would only produce 20 runs for the loss of two wickets, as the Rockets’ bowling attack fought back.

Bell-Drummond was the first to go, miscuing off the bowling of Sam Cook for 24, and Dan Lawrence was clean bowled by a Khan googly.

The away side needed to rebuild quickly if they were to post a defendable total.

Morgan answered the call, striking two sixes in Khan’s next set, but when he attempted the same trick on the 64th ball against Patel, the former England captain was caught at deep midwicket for 27 to leave the Spirit 86 for four.

Sensing the moment to turn the screw, skipper Lewis Gregory threw Khan the ball and he delivered.

The Afghan bowled Kieron Pollard and Jordan Thompson in a set of five which conceded just two runs.

Three balls later, Patel removed the set McDermott for 30 as the Londoners lost their last five wickets for just 25 runs. 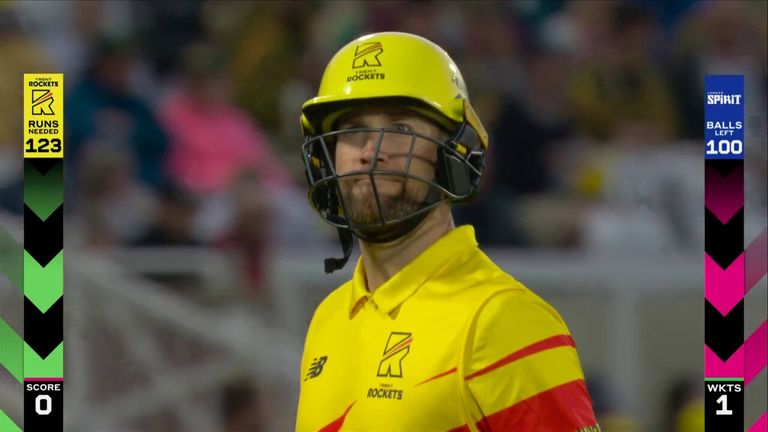 The first was by luck rather than design. Dawid Malan was run out from the first ball, of the chase with his partner Alex Hales looking sheepish as his teammate trudged off without facing.

Hales was back to apologise sooner than the Rockets would have liked, caught at mid-on for six off the bowling of Nathan Ellis, as they ended the powerplay 33 for two.

Hales’ wicket brought Kohler-Cadmore to the crease. Bought at the auction for £125,000, the Yorkshire player was in need of a big score to match his top bracket price.

And he proved his value as the partnership with Munro brought 85 off 51 balls, before Gregory smashed a six to end the game and put his team top of the table.

Hero of the game: Colin Munro (67no off 37 balls, including four sixes)

Munro said: “It wasn’t [easy] – they changed it up a fair bit, a little bit sticky on the wicket so just had to take it and see. A couple of times the balls, I closed my eyes, had a swing and it came off tonight.

“I love batting here, even when I’m the opposition, the wicket, but it’s great to have the crowd on my side especially fielding out the on the boundary for a change and not just getting it in the neck, actually a little bit of cheering and stuff. So it’s been awesome. The crowd’s been unbelievable. Trent Rockets’ Colin Munro says that having such an experienced team will give them a chance of winning The Hundred after he helped his side to a convincing victory against London Spirit.

Trent Rockets’ Colin Munro says that having such an experienced team will give them a chance of winning The Hundred after he helped his side to a convincing victory against London Spirit.

“It’s a great thing about our team, we don’t have to just rely on two or three players. Rashid comes in, bowls very well tonight after a tough first game that he had and, yeah, everyone just putting up their hand at the right time.

“I think if you look at our team it’s it’s pretty much Dad’s Army, we’ve got such an experienced team with some really good young talent as well. Everybody knows their game. If we do the little things well, the outcome will take care of itself.”

Next up in The Hundred sees a battle of the North at Headingley as the Northern Superchargers take on the Manchester Originals.

The women’s fixture gets under way at 3.30pm followed by the men’s match up at 7pm, all live on Sky Sports.

London Spirit return to action on Wednesday as they welcome Welsh Fire to Lord’s, with the women’s match at 3pm followed by the men’s at the slightly earlier time of 6.30pm.

Trent Rockets have a visit to the Southern Brave next on their schedule, with both matches live on Thursday (Women’s game at 3pm followed by the men’s match at 7pm).

Watch every match from The Hundred this summer live on Sky Sports.