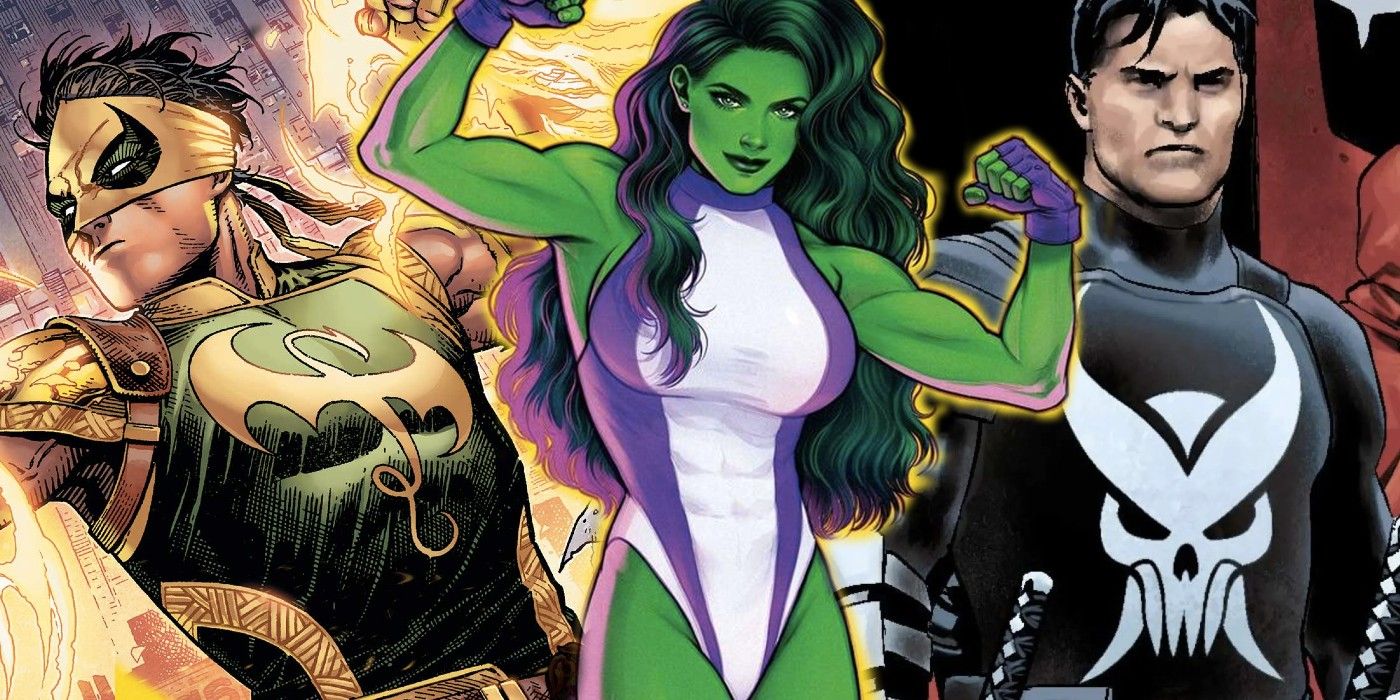 
While 2021 was a banner year for Marvel Comics, featuring everything from massive events like King in Black and Heroes Reborn to smaller character studies like Immortal Hulk and Iron Man, there are some exciting Marvel stories on the way in 2022. This year will see a war break out that’s been building in the pages of Marvel Comics for decades. There will be another revamping of the world of X-Men and the mutants. And beloved characters will receive new series and reinventions. Here are the most exciting Marvel Comics to look forward to this year.

The seeds for Reckoning War were first planted in the mind of Fantastic Four writer Dan Slott back when he was an 8-year-old reading comics. Since He first started writing stories for Marvel, he has been carefully building towards this event. It all comes to a head in Fantastic Four: Reckoning War Alpha by Slott and Carlos Pacheco, which hits comic book stores on February 2, 2022.

Related: The Most Controversial Marvel Comics Moments of 2021

While Slott has been somewhat coy on what the actual story will be, he has dropped clues as to who the villains of Reckoning War are. The event will tie into the Marvel Universe’s very first “Secret War.” This is not the 1984 comic miniseries, but an event that took place long before the birth of Galactus, the creation of Asgard or the formation of the Kree and Skrull empires. Reckoning War will focus primarily on the Fantastic Four, while also bringing in Uatu the Watcher, She-Hulk, the Silver Surfer and more. As Marvel’s First Family, the Fantastic Four deserve to be front and center in a major crossover event once again, and Slott’s 15-year tenure writing at Marvel has the potential to pay off in a big way in Reckoning War.

Writer Jonathan Hickman completely revamped the X-Men line of comics in 2019 with House of X and Powers of X. Now Marvel is embarking on a new era for its mutants, which it has dubbed Destiny of X. Spinning out of the events of Hickman’s final X-Men story, Inferno, Destiny of X will kick off with two concurrent miniseries, X Lives of Wolverine and X Deaths of Wolverine. The exact plots of those titles have not been revealed, but it is known that they will explore the past, present and future of Wolverine. The miniseries will have massive repercussions on the world’s mutants, and usher in the Second Age of Krakoa.

After the conclusion of the X Lives/X Deaths of Wolverine, Marvel will release a number of new X-Men books as part of Destiny of X this spring. There will be big status quo changes to ongoing books X-Men, Wolverine, X-Force, New Mutants and Marauders, the last of which will have a new creative team. There will also be new titles including Immortal X-Men, Knights of X, X-Men Red and Legion of X. Hickman’s reinvention of Marvel’s mutants was a game-changer, revitalizing the stagnant X-titles and laying the groundwork for some of the most exciting X-Men stories in decades. Time will tell if Destiny of X has as big an impact. It all begins when X Lives of Wolverine #1 by Benjamin Percy and Joshua Cassara releases January 19.

Things have been rough recently for Jennifer Walters aka She-Hulk. After getting blasted with more gamma radiation from a Celestial in the pages of Jason Aaron and David Marquez’s Avengers, Jennifer became a bulkier, more traditionally Hulk-like figure. She has been a prominent member of the most recent Avengers team, but has grappled with her rage and losing her sense of humanity. She-Hulk was also captured by the Winter Guard and posed as the Winter Hulk as part of an elaborate undercover operation to stop the destruction of Atlantis.

Related: Every Marvel Character Who Returned to Comics in 2021

The end of the World War She-Hulk story saw Jennifer absorb a Gamma Bomb and revert back to her smaller, more traditional look. This is the look she will be sporting in her upcoming solo title, She-Hulk by Rainbow Rowell and Rogê Antônio. The series will focus on her attempts to rebuild her law career in the wake of recent events. She-Hulk is one of the most dynamic characters in Marvel Comics and has been without a solo title for too long. Plus, with the She-Hulk television series debuting on Disney+ this year, Marvel will surely have an exciting story ready for fans who can’t get enough of Jennifer Walters. The first issue of She-Hulk will be released on January 12.

While he debuted during a high point in the popularity of martial arts in the 1970s, in recent years Iron Fist has been few people’s favorite character. Part of the reason for this has to do with his civilian identity, Danny Rand. As the Caucasian son of a wealthy businessman, Danny has been accused of falling into the “white savior” trope and is often held up as one of the most prominent examples of cultural appropriation in Marvel Comics. His popularity further waned following the lukewarm reception of the Iron Fist series on Netflix, which did little to make the character interesting or likable.

In 2022 a new hero will take on the mantle of Iron Fist in a self-titled miniseries by writer Alyssa Wong and artist Michel YG. While Marvel has not officially announced who this hero will be, it did say that the new Iron Fist will be of Asian descent. Recent comics have hinted that the new Iron Fist might be Lin Lie, a member of the Agents of Atlas team who currently goes by Sword Master. Lie is a young man from China who possesses the mystical Sword of Fu Xi, which he uses to battle demons while searching for his missing father. He has also trained with Shang-Chi, and would be an excellent choice to become the next Iron Fist. It will be interesting to see how this new Iron Fist addresses the character’s complicated history and carries on Danny Rand’s legacy.

Another controversial Marvel character will get revamped in the coming year when Frank Castle aka the Punisher gets a new logo and mission. At one point, the Punisher was one of the most popular characters in Marvel Comics, appearing in four separate titles on a monthly basis. As a ruthless vigilante, Castle perfectly encapsulated the grim and gritty aesthetic that was all the rage in comics back in the ‘80s and ‘90s. However, the Punisher’s signature skull logo has increasingly been co-opted by a number of groups including police and military, as well as far-right extremist groups. During the attempted coup at the U.S. Capitol in January 2021, a number of rioters were seen sporting the Punisher logo, reigniting calls for Marvel to retire the character.

While he has been sidelined for the past couple years, Marvel announced that a new Punisher series will be arriving in 2022 from the creative team of Jason Aaron, Jesus Saiz, Paul Azaceta and Dave Stewart. Rather than being a vigilante, Frank Castle will now be working for the Hand, a mystical cult of ninjas that serves a mythological Beast. Preview images for the new miniseries see the Punisher brandishing swords instead of his signature guns, and his skull logo has been completely redesigned. The new look could be inspired by oni, mythical Japanese demons. The reinvention has received some criticism from people on all sides of the political spectrum, with some accusing the Japanese-inspired logo of being cultural appropriation, while others think ditching the Punisher’s classic skull logo is an example of Marvel catering to political correctness. The big question that will hang over the new series is whether the character can grow beyond his vigilante roots and remain a compelling anti-hero without the baggage. Fans will have to see how the new mission plays out for Frank Castle when Punisher #1 drops in March.

Marvel most powerful teams will go head to head when the Avengers, X-Men and Eternals clash in the upcoming Judgement Day event. Promising to be one of the biggest crossover events of 2022, Judgment Day will arrive this summer. Marvel has teased a possible conflict between Earth’s Mightiest Heroes and the Eternals. A recent preview revealed that Eternals #10 by Kieron Gillen, Esad Ribic and Matthew Wilson will see the Eternals breaking into the Avengers’ headquarters, which is currently housed in the body of a Celestial at the North Pole.

Gillen is also writing the new upcoming series Immortal X-Men featuring art by Lucas Werneck, as well as the Avengers/X-Men one-shot that will be released as part of Free Comic Book Day. That book will be co-written by Gerry Duggan with art by Dustin Weaver. The exact details of the Judgment Day story and the nature of the conflict is yet to be revealed, but with so many power players going up against each other, it is sure to be a massive fight that could bring some big shifts in the Marvel Universe in the latter half of 2022.

That’s only a sampling of the many titles that have already been announced for 2022. This year will also bring readers new comics featuring characters like Silk, Ghost Rider, Spider-Gwen, Carnage, Hulk, Spider-Man and more. It can be assured that the House of Ideas has several more plans for the year that have yet to be announced. But one thing is for certain: 2022 is shaping up to be another huge year for Marvel Comics.

Next: The Best Marvel Comic Events of 2021