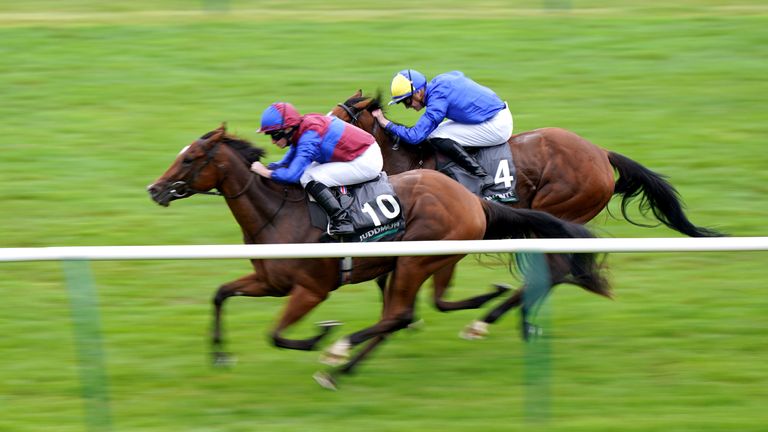 
The Group One Prix Rothschild Stakes at Deauville on Tuesday offers a top midweek treat, live on Sky Sports Racing, with an epic clash of Britain versus Ireland.

Royal Ascot heroine Saffron Beach travels to France on Tuesday for the Prix Rothschild (2.33pm) looking to add a second Group One to her already impressive CV.

Jane Chapple-Hyam’s filly signed off last season with victory in the Sun Chariot at Newmarket and stormed to success again when last seen in the Duke Of Cambridge Stakes in June.

Top rated off a mark of 116 and with leading British jockey William Buick booked once more, Saffron Beach should be hard to beat.

Leading the challenge is Aidan O’Brien’s Tenebrism, who returns to the scene of her Group One Prix Jean Prat success from last month.

That was over seven furlongs and Ryan Moore’s mount is back to a mile trip here for the first time since finishing fourth in the Coronation Stakes at Royal Ascot.

The home challenge is headed by Francis-Henri Graffard’s Malavath, a former Group Three winner at the track who needs to bounce back from below-par efforts in the 1000 Guineas and Prix du Palais-Royal.

1.18 Deauville – The Antarctic set to turn up the heat

O’Brien has made no secret of the high regard with which he holds The Antarctic, an exciting full brother to legendary sprinter Battaash.

While this two-year-old has yet to live up to his relative’s multiple Group One-winning standards, he has shown glimpses of possessing star qualities, including when chasing home classy stablemate Blackbeard in the Group Two Prix Robert Papin 16 days ago.

A repeat of that performance should be enough to take the Darley Prix de Cabourg (1.18), but he has nine rivals to overcome.

They include a pair of British contenders: Amy Murphy’s Manhattan Jungle and Michael Bell’s Kerindia. The former notched up three consecutive victories in France before finishing down the field in 14th in the Queen Mary Stakes at Royal Ascot. Kerindia, meanwhile, has made just one racecourse appearance, winning a Nottingham novice event at the start of July.

Hughie Morrison’s Our Jester finished seventh in the Champion Bumper in March and now makes a handicap debut on the Flat in this classy Cazoo Amateur Jockeys’ Handicap (1.25) at Ffos Las.

A mark of 75 looks potentially lenient after hugely credible efforts in defeat at Bath, Haydock and Chepstow.

Hat-trick seeker Psyche, for father and son duo Chris and Freddie Gordon, looks the main threat after scoring at Brighton and Wolverhampton.

Watch every race from Deauville and Ffos Las live on Sky Sports Racing on Tuesday, August 2.