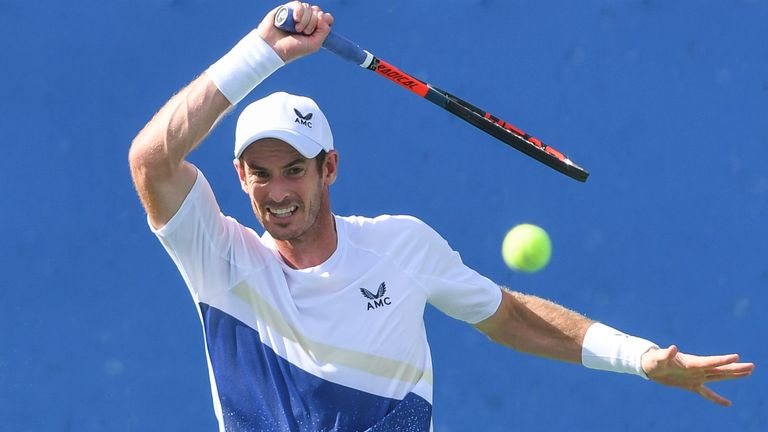 
Andy Murray fought hard but lost to Mikael Ymer 7-6 4-6 6-1 in his opening match at the Washington Citi Open.

Murray was first to put points on the scoreboard after a 19-ball opening rally but it was the 23-year-old Swede who broke the Scot’s serve and claimed the first game.

It was the beginning of a toe-to-toe encounter that saw Murray fail to convert four set points as world number 115 prevailed in a gruelling 80-minute first set.

Ymer looked to be on course for a straight-sets victory as he went a break and 3-1 up in the second set, but Murray would then win five of the next six games to level the match as his opponent appeared to suffer with cramp.

However, after a comfort break before the decider, Ymer emerged re-energised and it was Murray who struggled physically as the younger man raced to victory.

“It was disappointing obviously. I thought there was some good tennis in the first set. After that both of us were struggling a bit physically. The level of the tennis was not great,” Murray said. “Obviously had chances in the first set to close that out. I had set point in 6-5, then… three in the tie-break, and didn’t get it.”

It was a second successive tournament where Murray has faced physical issues, with cramping also causing him trouble last month at the Hall of Fame Tennis Championships in Rhode Island.

“I think he seemed like maybe he was cramping a little bit in the second set, but recovered absolutely fine after the break at the end of the [second] set. Went off to change and cool off a little bit, and he recovered well for the third, whereas I didn’t really. Yeah, just frustrating,” Murray said.

“Actually in Newport I cramped right at the end of one of my matches there. Really hot and humid. Usually I quite enjoy playing in those conditions. Struggled a little bit the past two tournaments with that. I need to have a little look at that with my team and maybe see why that is, make a few changes.”

Draper, Edmund through to second round

Despite Murray’s exit, there were two British wins on the opening day of the tournament as Jack Draper and Kyle Edmund both advanced to the second round.

Draper, 20, who impressed as he reached the second round of Wimbledon in June, produced a dominant display to beat American Stefan Kozlov 7-5 6-2.

The only trouble for Draper came at the start of the match as he went 3-0 down and almost gave up a double break, but the left-hander displayed his growing maturity to bounce back from the early blip.

Draper, who is a at a career-high ranking of No 81, will be rewarded with another clash against world No 8 Andrey Rublev, who he lost in a three-set thriller at the Madrid Open in May.

“For me, I know I’ve got the tennis,” Draper said. “It’s just about developing my physicality and being able to mentally cope with these guys as well. I think I’ve got a lot to improve still.”

The 27-year-old was forced to sit out almost two years as he underwent three knee surgeries, but produced an impressive display on his return to top-tier action in Washington.

Edmund’s victory means he will play compatriot Dan Evans for a place in the third round.

“It’s very rewarding. During the long periods where I was out – not picking up a racquet for five months – it was these events that I pictured myself being out here,” Edmund said. “It’s something that you miss, feeling the buzz, hearing the crowd, playing under pressure.

Elsewhere, Emma Raducanu’s professional doubles debut ended in straight sets as the Brit and fellow teenager Clara Tauson fell 6-4 6-1 to Romanian Monica Niculescu and the Czech Republic’s Lucie Hradecka in the opening round.

The defending US Open champion and her Danish counterpart, also 19, failed to put any points up as they quickly lost the first game to their more experienced challengers.

Only 10 minutes had passed before Niculescu and Hradecka had made it three in a row before quickly winning a fourth. Raducanu and Tauson were finally able to get the break to win the fifth game, and seemed to settle in a more comfortable partnership as they claimed two on the trot.

But they were easily outmatched by their opponents who claimed the first set on their third opportunity when Niculescu’s forehand sped past the outstretched racket of a hapless Raducanu.

A better start to the second set saw Raducanu and Tauson draw things level at one game apiece before their more experienced opponents’ superiority soon told, getting the break in the fourth game as they ran away with the set, Niculescu sealing the match with a volley to end Raducanu’s first foray in the format.

Raducanu will return to the court for her first-round singles match on Tuesday as he takes on American Louisa Chirico.

Meanwhile, former world No 1 Venus Williams suffered an opening-round defeat on her return to singles action after almost a year out.

The 42-year-old, playing singles for the first time since last August, lost 4-6 6-1 6-4 to Canadian qualifier Rebecca Marino under the lights in Washington.

“Just a little rusty,” Williams said. “I really put myself in good positions in the third set, too. Just trying to shake off some rust. That’s just to be expected. All I can do is just play another tournament and play better.

“I wish I could have pulled this match through for the crowd and for the tournament. But [it] doesn’t always work out.”

The seven-time Grand Slam winner is set to play in WTA 1000 events in Toronto and Cincinnati over the next two weeks.