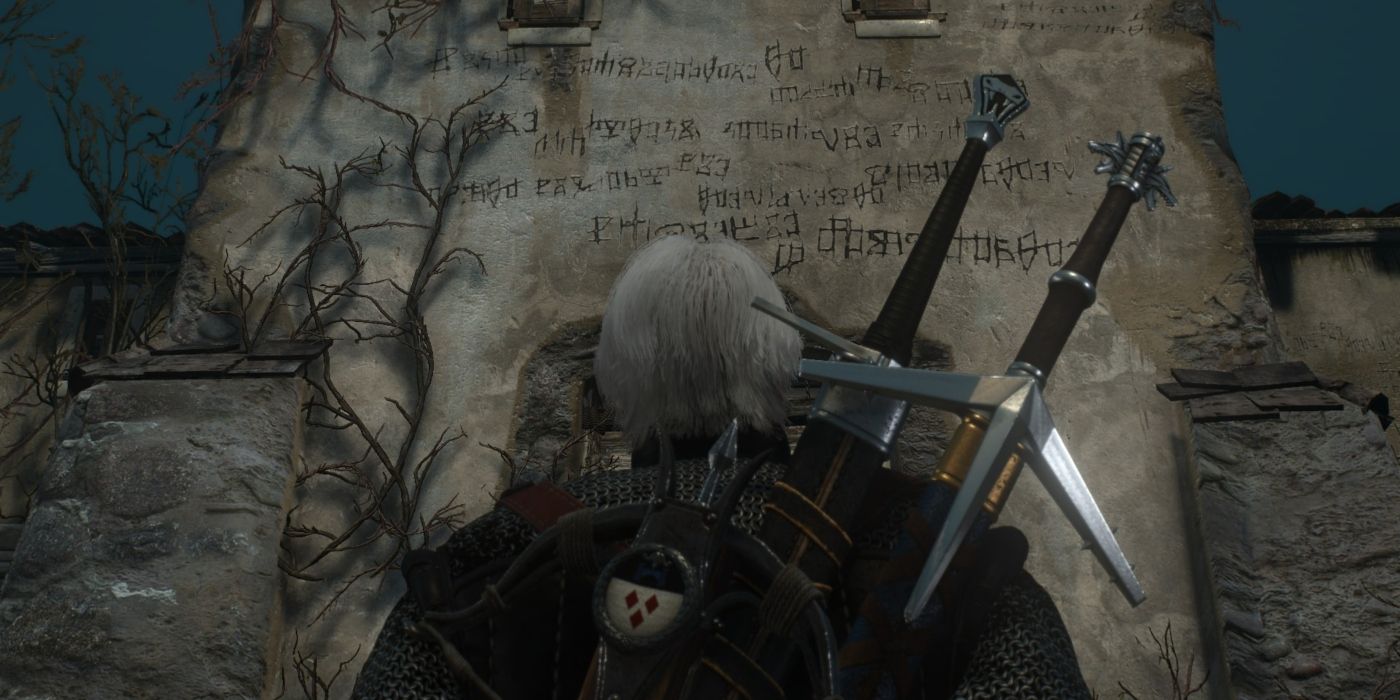 
One of Geralt’s most dangerous villains was secretly involved in a main quest of Witcher 3’s Blood and Wine DLC: the Mirror Merchant himself.

Despite featuring a new monster contract in an entirely new locale, Geralt’s journey is influenced by the malevolent mirror merchant, Gaunter O’Dimm, one of the primary antagonists from The Witcher 3: Wild Hunt‘s Hearts of Stone DLC in the Blood and Wine follow-up. In keeping with his character, the references to O’Dimm in Blood and Wine are subtle, and require some reading between the lines to catch at all. His connection is strongly implied, though, and players with an eye for detail might catch the veiled allusion to Master Mirror.

For players who haven’t played Hearts of Stone yet, Geralt actually first encounters Gaunter O’Dimm way back in White Orchard. There the Man of Glass nudges Geralt in the right direction towards finding one of Witcher 3‘s romanceable characters, Yennefer. Acts of altruism are rare in this video game series, so his generosity may seem suspicious. So, too, is his sudden disappearance from the table after their conversation. What seems at first to be an odd desultory encounter, however, is actually CD Projekt Red setting up something far bigger down the road.

After embarking on the Evil’s Soft First Touches quest, Geralt becomes embroiled in a dangerous adventure for a man named Olgierd von Everec. Doomed to execution and trapped onboard a ship in this Witcher 3 DLC, O’Dimm comes to Geralt’s aid once again. Eight spiraling quests and roughly ten hours later, both O’Dimm and Olgierd’s stories are finally seen through to completion. That is, until, Geralt travels to Toussaint to help Anna Henrietta hunt down the Beast of Beauclair.

The reference to O’Dimm comes during the fourth main quest in the Blood and Wine DLC, La Cage au Fou. The quest requires Geralt to obtain the salivary glands of a rare Spotted Wight, and takes place in the Trastamara Estate ruins, a broken down manor deep in the southern woods. The terrifying Witcher 3 monster can be encountered and killed with a silver sword, but, as is often the case in this game, the true nature of the encounter runs deeper than a simple monster to be slain.

Oddly enough, the trees surrounding the estate are adorned with spoons. Upon reaching the doorway, a cutscene will trigger during which Geralt reads out a curse etched on the walls. The curse reads “none shall sit and dine with you at your table, no spoon you have shall sate you, never again shall you wish to spy your reflection in the mirror”. Gaunter O’Dimm recites a similar geas when he meets Geralt at the crossroads, but this alone isn’t enough to connect the Mirror Merchant to the Spotted Wight. It’s only if Geralt chooses not to destroy the Witcher 3 monster but to instead cure the curse that O’Dimm’s involvement becomes undeniable.

Related: Witcher 3: How to Access the Alternative Looks DLC

If Geralt chooses to share a meal with the wight and doesn’t use a spoon, the curse will lift and the wight will be dispelled, revealing it to be an elderly woman named Marlene de Trastamara. When he returns with her to Corvo Bianco, Geralt imparts Marlene’s story to his butler, Barnabas-Basil. He explains that a beggar once came to her home seeking alms. Ignoring the ancient rite of Toussaint hospitality, Marlene refused to aid the beggar. Here Barnabas comments that “to neglect the custom is to bring great misfortune down upon oneself.”

Geralt goes on to recount that Marlene drove the man off, and that’s when CD Projekt Red drops the biggest clue. Gaunter O’Dimm’s theme starts to play in the background, and continues throughout their conversation. It’s a subtle nod, but adds extra depth to this particular Witcher 3 side story’s narrative. The implication is that O’Dimm was the beggar in Marlene’s story, and that, in retaliation for her inhospitality, cursed her thusly. This is very much in keeping with O’Dimm’s modus operandi throughout The Witcher 3. He prefers to feed on a person’s own cruel nature to torment and doom their soul, rather than directly interfere.

Next: The Witcher 3: How To Complete The Secret Achievements/Trophies

Jeremy is an avid gamer, writer, musician, and instructor. He has been teaching for over 15 years, and written all manner of gaming articles, reviews, FAQs, walkthroughs, strategy guides, and even the odd screenplay when the mood strikes.

When he’s not out playing jazz, Jeremy is deeply immersed in the latest games, much to the distress of his attention-hungry cat.